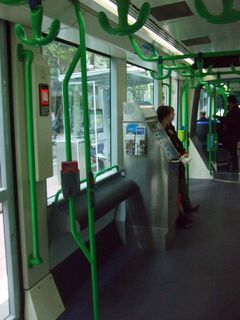 The marvelous post at Light and Air on the recent history of ceiling height is mostly about architecture, but it resonated for me as a transit planner.*

Over the past century, U.S. citizens grew taller while ceiling heights shrank.  Simultaneously, the U.S. lost world leadership in average height to the Netherlands and eight other countries, whose people grew taller faster.  It is difficult to find people who prefer low ceilings.  In wealthy western societies there seems to be no other time when ceilings and heads were so uncomfortably proximate.  What does ceiling height tell us about our society …?

There is a reason that dark, low-ceilinged rooms are still commonly used in literature to describe spaces that symbolize poverty, danger and unhealthy conditions.

Ceiling height is interesting because it’s one of those things that strikes most of us subliminally.  We aren’t always aware of why a high-ceilinged space feels better, but it does.

The low-floor bus (and LRT car) were invented mostly to make transit accessible to the disabled, but the result has been a significant shift in the psychology of the ride.  The lower floor, of course, means a higher ceiling relative to the vehicle floor, which permits larger windows and more air.   A crowded bus or rail car is never pleasant, but a few feet of space above you can lessen the sense of being complete boxed in.
It’s striking how little ceiling-height was talked about as the low-floor bus appeared in the 1990s.  The disabled-access issue got all the press at the time, but the low floor does so much more.  It makes the bus or train a little more like a civilised room, which is to say, a room with high ceilings.

There’s an interesting urbanist angle to the low-floor too, if our goal is to expand and enrich our shared experience of civic space.  When running along the street, stopping at sidewalk platforms, the low floor can suggest that the vehicle is an extension of the street; when a low-floor bus or rail-car opens onto a sidewalk, it’s almost like it’s a detachable part of the sidewalk that moves you along faster than you can walk.  It leaves you feeling that you are in the civic space of your city, rather than lifted out of it and boxed up for transport.
” and not just because at 6’5″ I move in a world where doorframes and chandeliers often hang too high for my line of sight but just low enough for me to crash into, yielding a more-or-less permanent sore bump on my head at an altitude just over 6’4″.

You are here: Home › The Joy of High Ceilings (also called Low Floors)