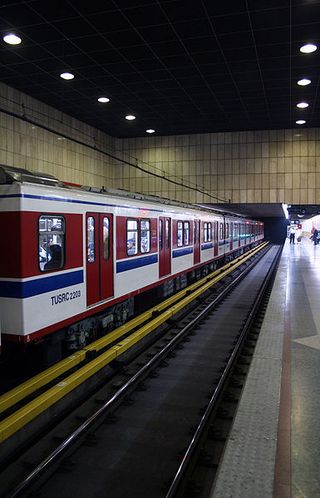 Amid the mounting civil unrest in Iran’s capital, when everyone fears that mass violence may be imminent, let’s pause to notice that the Tehran Metro is still running.

Andrew Sullivan‘s wall-to-wall coverage includes this cellphone-video record of a ride on the Metro on this exuberant and anxious day.

It’s an immense challenge to keep a transit system running in such conditions.  Transit operations are a real-time collaboration of many people with different political views.  The fierce disagreement inflaming the population must also divide and arouse the transit workforce.  Some may even feel tempted to distort the operation in a way that benefits their side of the conflict.   In such conditions the necessary teamwork becomes a real test of an operating company and its staff.
Obviously, there are baser considerations at work.  I’m sure the government would have shut down the metro — which is clearly helping the opposition assemble larger crowds than the government can muster — if they didn’t need to maintain the illusion that life is normal in Tehran apart from a few hooligans.
But I just want to recognise the ordinary drivers and dispatchers and attendants who are keeping the Metro running in these days of terrifying uncertainty.  It’s not just diligence, it’s courage.

Comment of the Week: Connection or Intersection?
When Expansion is Dilution

3 Responses to The Revolution on Transit

You are here: Home › The Revolution on Transit