Hello from Berlin, where I chanced to be in town for one of the larger transit meltdowns I’ve seen.  And I’ve seen a few! 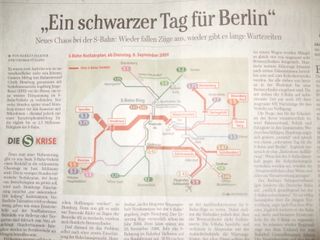 Berlin’s S-bahn, one of two rail rapid transit systems that jointly cover the city, found problems with its previous inspection of brakes.  The S-Bahn management appeared to have discovered, rather suddenly on Monday afternoon, that a huge range of brake inspections that it assumed were being done were not done, or not properly.  The agency manager called it a black day for Berlin, thus saving some work for a headline-writer at the Berliner Morgenpost (pictured).

Among all the parts on any transit vehicle, good transit managers cultivate a special reverence for brakes, because their failure can be so disastrous.  You can cut a lot of corners in transit operations, but you don’t cut corners with brakes.  So S-Bahn did the only thing they could do on discovering, all at once, that their brake inspections were not in order for about 3/4 of the fleet:  They took all those trains out of service, shutting down 3/4 of the system.  The decision was made late Monday afternoon. Of course Tuesday morning was a region-wide mess as most people had not gotten the word. 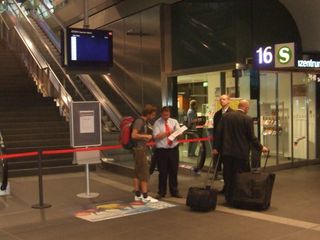 Wednesday night it’s still a mess, but I have to say that I’m really impressed with how fast the agency acted.  Imagine having to decide at 4:00 PM which 75% of your service won’t run tomorrow morning.  Too many transit managers would have just said, well, we’ll cut 75% of the frequency on everything — because that’s fair, right?   At least, everyone will get a train eventually, right?

They were much smarter.  They reviewed every corridor to look at where the other transit networks (the U-bahn subway, regional commuter trains, and in some cases buses and trams) were positioned to handle some of the demand, and focused their cuts there, deleting all service on the corridors marked in red on the newspaper’s map above.  It looks really bad on the map.  The main east-west S-Bahn line across the middle of the city has had all its service cut west of Alexanderplatz, including such key destinations as the main intercity rail station, Berlin Hauptbahnhof.  But as I understand it, they cut there because so many regional commuter trains come through the same corridor (though making far fewer stops); thus there would be some options for people in each community even though many stations would be closed.

Then today, barely over 24 hours after the disaster struck, they came out with this newsletter.  Even if you don’t read German, look at it to get a sense of the extent and detail of information.  Not just a clear map (on page 2) showing what’s not running, but also an explanation, station by station, of exactly what your options are and what the other transit systems are doing to take up the slack.

I’m impressed, especially with the depth and speed of information.  As for the rapidly but smartly improvised service plan, it reminds me a little of what New York City’s transit agencies had to do on 9/11.  This is one of those moments when you are grateful your staff includes all those transit geeks — of all ages, but especially the older ones — who know the network really well because they love it so much, and who have already, just as a form of daydreaming, invented zillions of contingency plans in their heads.  I mean, what would New York City Transit do if it suddenly lost its World Trade Center stations and the whole 1/9 subway in Lower Manhattan?   I wouldn’t be surprised if one of the agency’s staff had actually thought about something like this in the shower, or while daydreaming in a boring meeting — not morbidly, not imagining anything like the disaster of 9/11, but simply because if you’re a transit geek, contingency plans are fun to think about.  They’d thought up zillions of other contingency plans as well.  And while some transit geeks can tend to get lost in detail in their daily work, at times like this a whole city should be grateful for them.

UPDATE:  On why the brake inspections were fouled up, see the comments section, but only if you’re ready to be drawn into the whirlpool of debate and recrimination about European models of transit governance.  Not everything is perfect there.

Berlin: Seen Through a Bus-Wrap
Transit in the Fast Lane: The Access Challenge

7 Responses to Berlin: The S-Bahn Meltdown

You are here: Home › Berlin: The S-Bahn Meltdown