Posted on September 6, 2009 in 2-Keepers, Berlin, Branding, Marketing
Many transit agencies depend on advertising revenue from wraps,  those advertisements that cover the windows of the bus as well as the rest of the side.  Berlin has them on some of its double-deckers. 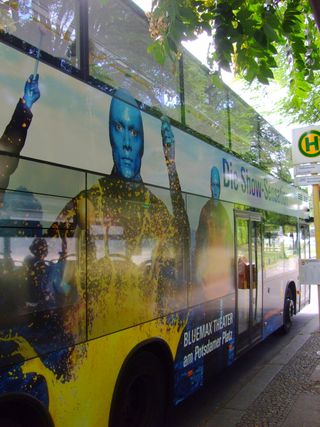 Seen from inside this bus, Berlin’s beautiful central park, the Tiergarten, looks like this: 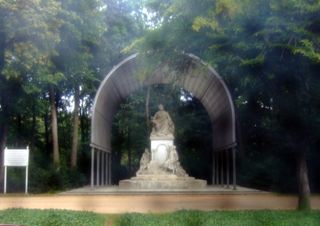 Fortunately, if you lean away a little, the image resolves itself more clearly: Darrin Nordahl’s book My Kind of Transit mentions bus wraps as an example of a transit agency decision that is disrespectful of the customer and indicative of a lack of self-respect.  He uses this as a reason we shouldn’t respect buses, either, and obviously I don’t follow him there. (Streetcars and monorails are sometimes wrapped, too.)  There are better and worse wraps; I’ve seen better in America.
I admit that I haven’t researched how much revenue bus wraps bring, as opposed to advertising that doesn’t cover the windows. It had better be really substantial.
But still, to me it’s an unpleasant sensation to get off a bus and realise you’ve been looking through a billboard that isn’t even intended for you.  You’re just part of the advertising mechanism.
Wikipedia notes that all mobile vehicle adverising is illegal in New York City.
Are wraps ever a good idea?

Prague and San Francisco: On Communist vs Capitalist Modernism
Berlin: The S-Bahn Meltdown

9 Responses to Berlin: Seen Through a Bus-Wrap

You are here: Home › Berlin: Seen Through a Bus-Wrap