Posted on September 3, 2009 in Branding, Vienna

As part of my Europe tour, I thought I’d give some attention to things that even the best European systems have trouble getting right. 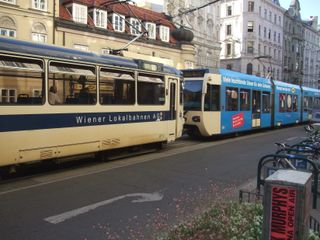 On the streetcar line in front of my hotel in Vienna (on Wiedner Hauptstrasse) three streetcar lines routinely went by.  They were the major Line 1, the minor Line 62, and something called the Wiener Lokalbahnen, which has to be referred to by name because it doesn’t have a number.
From its Wikipedia entry, Wiener Lokalbahnen (“Viennese Local Rail”) is a government owned company running both freight rail and the single streetcar line from Vienna to Baden.  The article says that it’s “integrated with” the regional transit authority (the Verkehrsverbund Ostregion” or VOR).  It does seem to be integrated as far as fares and public information go, but it’s not integrated in the nomenclature.  If it were, it would have a number like any other tram line and the operating company name, Wiener Lokalbahnen, wouldn’t be needed to describe the service to the customer.
I don’t know the details, but this looks like one of those cases where an operating company hasn’t consented to disappearing to the user and some sort of compromise has been made.  The result is muddier for the customer, hard to represent on maps, and makes the on-board announcement of connections longer and more confusing.  But these compromises happen, even in near-perfect Vienna.
Oh, and one of the streetcar lines is called the “D”, while all the rest have numbers.  Probably a story there too.

You are here: Home › Vienna: Even Perfect Integration Isn’t Perfect