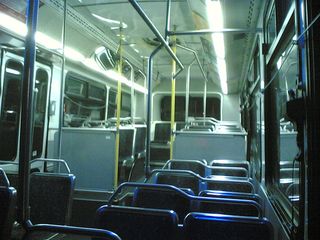 Everyone should know how to respond to stories like this, because they’ll keep coming.  From Kevin Libin at Canada’s National Post, an article called ‘Save the Environment: Don’t Take Transit.”  It quotes the usual suspects, but it still needs a clear response:

“Subsidized transit is not sustainable by definition,” says Wendell Cox, a transport policy consultant in St. Louis, and former L.A. County Transportation commissioner. “The potential of public transit has been so overblown it’s almost scandalous.”

It’s not that environmentally minded transit promoters are being dishonest when they argue that city buses are more efficient than private cars: It’s that they’re talking about a fictional world where far more people ride buses. Mass transit vehicles use up roughly the same energy whether they are full or empty, and for much of the time, they’re more empty than full.

For the bulk of the day, and on quieter routes, the average city bus usually undoes whatever efficiencies are gained during the few hours a day, on the few routes, where transit is at its peak.

In 19 years as a transit planning consultant, I’ve studied the operations of at least 100 bus and bus+rail systems on three continents; I have never encountered one whose overriding goal was to maximize its ridership.  All transit agencies would like more people to ride, but they are required to run many empty buses for reasons unrelated to ridership or environmental goals.  To describe the resulting empty buses as a failure of transit, as Cox does, is simply a false description of transit’s real, and conflicted, objectives.

If public transit agencies were charged exclusively with maximizing their ridership, and all the green benefits that follow from that, they could move their empty buses to run in places where they’d be full.  Every competent transit planner knows how to do this.  Just abandon all service in low-density areas, typically outer suburbs, and shift all these resources to run even more frequent and attractive service where densities are high, such as inner cities.  In lower-density areas, you’d run only narrowly tailored services for brief surges of demand, such as trips to schools at bell-times and commuter express runs from suburban Park-and-Rides to downtown.  If you do such a massive shift of resources, I promise your productivity (ridership per unit of cost) will soar, and you won’t have as many empty buses.

Why do we know that’s the answer?  Because if you rank a transit agency’s lines by productivity (riders per unit of cost), the top ranking services are almost all in one of these categories:  either (a) all-day high-frequency service to areas of high density or (b) peak-only commuter express from suburban centers to downtown, or (c) services to suburban schools at bell-times.

So if we were talking about Seattle’s King County Metro area, for example, a ridership-maximizing service plan would probably offer no all-day transit service outside the City of Seattle except for links to the densest suburban centers such as downtown Bellevue and perhaps some older, denser inner-ring suburbs such as Renton and Burien.  Beyond that, the suburbs would have nothing but school services and express buses to Seattle at rush-hour.  In the dense urban fabric of Seattle, on the other hand, you’d have buses or streetcars every three minutes on every major street, with lots of rapid-bus overlays, etc, etc.

The outcry would be tremendous, the politics toxic, the prospects for implementation zero.  I would never propose it.  But there’s no question that such a service change would dramatically increase ridership, dramatically reduce the number of empty buses, and thus improve how transit scores on the kind of tally that Cox and his allies propose.

Meanwhile, back in the real world, transit agencies have to balance contradictory demands to (a) maximize ridership and (b) provide a little bit of service everywhere regardless of ridership, both to meet demands for ‘equity’ and to serve the needs of transit-dependent persons.

One analysis that I’ve done for several transit agencies is to sort the services according to whether they serve a “ridership” related purpose or a “coverage” related purpose.  Ridership services are justified by how many people ride them.  Coverage services are justified by how badly people need them, or because certain suburbs feel they deserve them, but not based on how many people ride.  I encourage transit agencies to identify which are which.  Once a transit agency can identify which of its services are trying to maximize ridership, you can fairly judge how well those services are doing in meeting that objective, including all the environmental benefits that follow.  Until then, the Cox argument is smoke and mirrors.

My 2008 Journal of Transport Geography paper on transit’s multiple purposes, exploring how transit agencies can get control of this narrative, is here.

Photo from lantzilla via Flickr, via Streetsblog Los Angeles

Bus vs Rail, an “Oversimplified Comparison”
Why is New York’s Transit “Always in Trouble”?

You are here: Home › The “Transit Isn’t Green Because It Runs Empty” Line