New York City transit supporters are on fire today as their transit agency, the MTA, announced deep service cuts.  Service cuts are happening all over the US this year, as the economic crisis has cut into most of the local funding streams on which agencies rely.  In many cases, including California and New York, the problems have been compounded by raids on state transit funding streams to help balance state budgets.

There seems to be plenty of blame to go around for New York MTA’s especially dire straits.  The New York Times offers three expert views on their “Room for Debate” forum, though the three don’t seem to be disagreeing.  Two emphasize the need for more secure government funding, while the third points out the need to push back harder on labor costs, and it sounds like they can all be right.  None of them says that service cuts are a good thing.

But here’s an eerie echo of my last post, where I pointed out that sometimes transit agencies don’t deliver environmental outcomes because they’re being required to serve other competing goals.  This stunning graphic from Second Avenue Sagas tells a similar story about the New York MTA, but in the area of budgeting rather than service design. 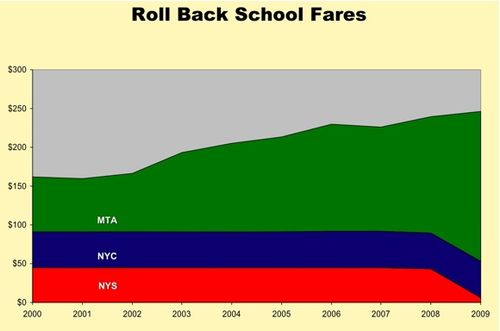 It appears that in 1995, the governments of the State of New York (NYS), New York City (NYC), and the MTA decided to split three ways the cost of discounted transit fares for students.

Student ridership (high school and below) is a mixed blessing for transit agencies.  You’ll hear a lot about how great it is that kids are “forming transit habits” at an early age.  But school-kids consume more than their per-capita share of the transit budget, and not just because they are more likely to damage buses and trains than adults are.  Schools tend to generate extremely high and sharp peaks — very brief periods of the day when huge numbers of students want to travel.  Extreme peaking means overcrowding that disrupts schedules and that often requires extra buses to be pulled out for very short shifts.  Very short work shifts, in turn, mean higher per-hour labor costs, because labor contracts usually define a minimum shift period (often 4 hours) and the period of school demand is often much shorter.

During the 1990s, when I was a consulting planner in California, something similar was happening all over the state.  School districts, facing budget cuts, were choosing to cut school bus service rather than cut education.  The problem of school transportation was shifted, without much funding, to the transit agencies.  The worst part of this was that once school districts no longer cared about transport, they no longer thought about transport efficiency when they set their bell times, so transit agencies were constantly dealing with unreasonable expectations from schools about when they could serve them.  If four different schools all let out at 3:10 PM and want you to be there waiting, that’s four buses you have to buy and maintain and four short driver shifts you have to run.  And the parents aren’t yelling at the school, they’re yelling at you, the transit agency.  When the schools had to do their own transport, they were more likely to stagger bell times so that longer shifts and fewer buses could do the same work.

So student discounts that push student ridership higher are going to be expensive for a transit agency, even if the agency’s being compensated for the lost revenue.  But the MTA generously agreed to pay a third of the discount’s cost, while the City and State were supposed to pick up the other two thirds.  The chart shows what happened next.   For some reason, as costs of this discount continued to grow due to growing numbers of children, the MTA found itself making up the difference.  (Note to dealmakers: state the deal in percentages, not dollars!)  Finally, in the budget crises of 2008, the State cut its own contribution.  Suddenly, MTA was paying the full cost of a discount that didn’t really serve the agency’s mission.  And of course, when they discussed reducing it, the story was cruel MTA trying to balance the budget on the backs of poor students.

It’s a brutal reminder that in many US urban areas the multiple layers of government don’t always support each other, and that especially in lean times they are strongly tempted to renege on the all-too-informal agreements that glue the system together.  In such moments, it often comes down to pure political clout, and special-purpose governments such as regional transit agencies usually have less clout than the governments of states or major cities.  So sometimes, as in this case, they end up bearing costs because they were the weakest party of the deal.

So “Why is the MTA always in trouble?”   When even the transit-friendly New York Times frames the question that way, we really do have a problem.  If you’re told that your neighbor’s teenage son is “always in trouble,” aren’t you going to assume that the trouble must be his fault? We’re being encouraged to think of transit, or at least the MTA, as having some kind of ongoing sustainability problem or weakness. To compound the insult, we hear talk of whether MTA needs a “bailout.”  Cap’n Transit explores how these “frames” work in a must-read post today.

The MTA may be “always in trouble” because it hasn’t made tough deals, but the toughness of the deals it can make, especially with more powerful levels of government, depends on the public’s ability to blame the correct layer of government for the problem.  This is hard to do, because overlapping governments are often not as clear as they should be about who’s responsible for what.  Cap’n Transit also discussed this a year ago, here.

The only real long-term solution to this problem is for MTA to figure out how to be more transparent.  Organizations don’t really like to be transparent, because if you’re perfectly transparent you’re invisible, and then nobody appreciates you.  But if you’re completely opaque, you’ll end up wearing all the blame, because blame and praise are both like light in this case.

Part of transparency is avoiding deals like the three way funding split of the New York school subsidy.  Don’t just split the subsidy three ways.  Instead, do the harder work of deciding why we fund school transportation and which level of government should be funding that outcome.  If you’re going to split the subsidy three ways, be really clear about what happens when the demand rises and/or someone reneges on the deal.  The correct answer should be that the subsidy drops in ways that students will notice, and all parties to the deal refer complaints to the party who really dropped the ball.  Another angle would be for the MTA to demand clear separate pots of funding for (a) its ridership-maximizing mission, with all the environmental and urban life benefits, and (b) its social service mission, which is about responding to the needs of specific groups with low-ridership buses or fare discounts.  Let the legislature decide how much it wants MTA to spend on each goal, and then get out of the way and let them do it. (Much more on this angle here.)

And aim, too, for clearer divisions of responsibility.  If we’re talking about funding for student transportation, there’s a credible argument that it should go through the education budget.  The taxpayer doesn’t care.  It’s the same dollar out of her pocket whether it’s an education subsidy or a transport subsidy.  Educational institutions have massive impacts on the real costs of student transportation through (a) how they set belltimes and (b) where they locate schools.  Of course, that would imply that everyone else is also responsible for the transport cost impacts of where they choose to locate; if we opened those floodgates, the sudden transparency might be blinding.

For excellent wall-to-wall coverage of the New York transit budget crisis, see Second Avenue Sagas.  Chris Leary at On Transport is also on the case.  And for veil-stripping commentary on what’s really going on inside the language, keep an eye on Cap’n Transit.

Finally, to New York commenters, please feel free to correct me on matters of fact, but note that I am not claiming MTA’s problems are solely due to the school subsidy, nor assigning broader blame for their troubles.  This story isn’t really for New Yorkers at all; it’s for everyone else who’s ever wondered why their transit agency seems to be “always in trouble.”  Short answer: it may not be their fault.  So don’t automatically rip into your transit agency when they cut service, at least not until you understand who else may have let you down.

The “Transit Isn’t Green Because It Runs Empty” Line
Can Dial-a-Ride Get High Ridership from Low Density?

15 Responses to Why is New York’s Transit “Always in Trouble”?

You are here: Home › Why is New York’s Transit “Always in Trouble”?