If any city clearly needed a downtown loop transit service, it’s Vienna.  The city’s most important street is the Ringstrasse, a major processional street — much like a Parisian boulevard in feel — that makes an almost-complete loop around the old core of the city.  A boulevard along the river completes the circle.
On Google Earth, it jumps right out at you.  On this shot of central Vienna (click to enlarge) note the river cutting across the northeast corner of the image.  Where the river exits the image on the north, you can see a very wide street taking off to the southwest, then making a series of eastward and northward bends to come back to the river.  That’s it.   The loop is about one mile (1.4 km) in diameter. 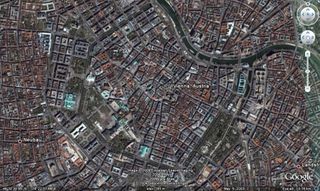 If something really matters in Vienna, it’s on the Ringstrasse.  On this loop you’ll find the city government, a huge range of museums, the national libraries, the national parliament, the most important ministries, the major university, and a lot of prestigious corporate addresses.
Inside the Ringstrasse is the old inner city.  While it’s a prestigious address too, it’s also the city’s medieval core.  Its narrow, crooked streets make great pedestrian spaces but couldn’t support a big, high-traffic destination, even if you could get approval to build anything in such a historically sensitive place.  So while the center isn’t empty, the Ringstrasse does correspond to a ring-shaped pattern of major activity, with somewhat lower but still strong density in the middle.
I’ve worked in a lot of downtowns, and seen a lot of downtown shuttles; I’ve never seen a geography where a downtown loop was more obviously justified.  Everyone understands the Ringstrasse.  So much important stuff is on it.  Surely, whatever else you do, you should have a really frequent service just looping the Ringstrasse in both directions, so people can get from any major destination on it to any other.  But that’s not what they do.
Here’s the Vienna rail rapid transit network again, with the Ringstrasse-enclosed area shaded in yellow. 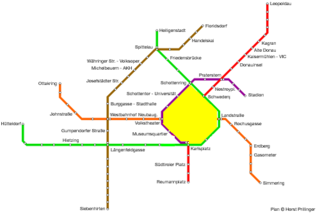 Now look at the network again without the shading.  The red arrows remind you of the Ringstrasse streets. 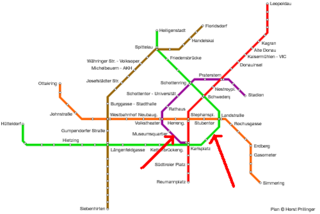 There’s continuous subway under the whole thing, but it’s two different lines.  The green line comes in from way out the west, swings around the east side of the Ringstrasse and heads out again to the northwest.  The purple line, though incomplete, is obviously designed to grow into the same shape on the other side, with two eastern branches connected via the west side of the Ringstrasse loop. Meanwhile, two other lines (red and orange in this drawing) create a cross pattern inside the ring, providing another alternative for travel between opposite sides of it.
If you were focused on the Ringstrasse, you wouldn’t do it this way.  But what Vienna does meets perhaps 80% of the Ringstrasse circulation market with lines that need to run through the central city anyway.  That’s always the key: If you have a downtown circulation need, the first step should always be to figure out how to use services that are already there, rather than imagining new ones because those services can’t be exactly what you’d like.
Now what’s really interesting, and beyond my ability to draw for you right now, is that the streetcar system on the surface is doing a very similar pattern: there’s a continuous loop of streetcar trackage, but different lines cover the eastern and western sides of it, connecting with each other at the north and south ends just like the subway does.  I’m less sure I understand why there’s no continuous Ringstrasse streetcar, but I do think this a good example of how even a city that’s built on a loop, and whose most important street is a loop, doesn’t necessarily need transit that runs in loops.
Because even if our city is loop-shaped, our desire for travel is not.

Vienna and the “Style of Youth”
Vienna’s Gentle Glass Boxes

8 Responses to Vienna: Life Without Loops

You are here: Home › Vienna: Life Without Loops