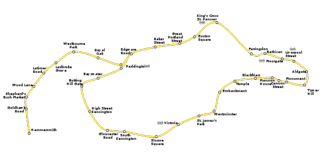 One of the world’s most famous continuous loops is finally reaching an endpoint.  The London Underground’s Circle Line, which has long attracted tourists with its simplicity but bedeviled its operators with lack of rest, is to be broken apart into a “tadpole” shape, with trains leaving the circle at Paddington, via a spur of the current Hammersmith & City Line, to end at Hammersmith.

As discussed here, loops touch deep things in the human psyche.  Nobody wants to reach the end of the line, really, except for the transit operator.  In fact, the “end of the line” shows up fairly often as a metaphor for death.  So at many scales, from the London Underground to tiny downtown circulators, there’s a constant temptation to offer services that never end, services running in continuous circles.  Few people actually want to travel in circles, but the embracing quality of circles, and perhaps the subtext of forgiveness in the notion that life will eventually bring you back to anything that you missed, keeps causing them to appear, not just in plans but in operations.  Montréal is the latest to propose a giant continuous loop in its subway system.

Why did the Circle Line come apart?  Because it was hard to operate reliably.  Reliability depends on regular breaks that give a late service the opportunity to catch up to its schedule.  Human drivers obviously need breaks too.  Actually, the transit industry usually distinguishes between two kinds of break:

Many labor contracts and operations policies have complex formulas governing these two things, but in broad terms, a bus or tram in mixed traffic needs at least 10% of its time to be layover and recovery, and often closer to 15%, while exclusive right-of-way services may need a bit less.

Since people rarely want to be waiting on the vehicle while these breaks occur, efficient transit lines have endpoints where the vehicle will be empty.  Most transit lines that are presented as continuous circles have some provision for this, but it’s often awkward.  On the Circle Line, drivers took their breaks by leaving the vehicle and taking over one a few minutes later, a method called “operator fallback,” which provided layover but didn’t solve the problem of recovery.  Now that they have both, they should see better operations, and perhaps even happier drivers.

8 Responses to London: the Circle Reaches an End

You are here: Home › London: the Circle Reaches an End