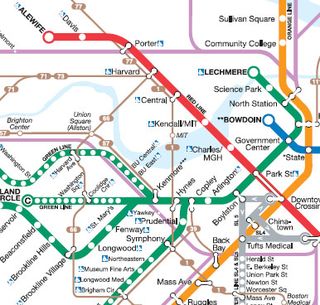 As several commenters have mentioned lately, Boston’s transit agency recently published a new network overview map, part of an overhaul of the information system.   The new map is similar in function to a subway network map but with some key bus lines added.  Here’s a slice, but you can get the whole thing, in much better resolution, here.

Most large transit agencies with extensive rail transit publish a map of just the rail transit services.  These tend to be the fastest, most frequent, and highest-capacity services in the network, so it makes sense that if you zoom out to a full-system overview, these are what you should see.

But when you look at the map asking a specific question — “So how would I get from A to B?” — a standard rail transit map may not give you the answer, especially if you’re outside the core.  Most mature rail transit networks have a core area where many lines cross, forming a lattice of lines that can be used to get from almost any station to any other.  Think London inside the Circle Line loop, or Lower Manhattan, or most of the city of Paris.  But further out, the rail transit map presents single lines radiating outward from the city.  To travel between two outer stations on different lines, the subway may not be the fastest route, because it will require you to go into the urban core and back.

In a smaller network like Boston’s, there’s only a small area downtown where many subway lines interconnect.  Most of the network is formed by radial lines extending outward from downtown.  So many, many trips between rail stations are not logically routed via the rail network.   If you want to go, for example, from Harvard on the Red Line to Harvard Avenue station on the Green Line, you don’t want the Red Line or the Green Line, you want bus line 66.  And while the 66 isn’t as frequent as a subway (its midday frequency is 16 minutes, which usually means it used to be 15), it’s still going to get you there sooner than taking the subway into downtown Boston and back out.

I don’t know the intentions behind the selection of “key bus routes,” but that’s the best sense I can make of it.  And as such, it makes good sense.  As always, I would prefer to see a Frequent Network map, where the appearance of a line guaranteed high frequency, but such a map would probably be much more crowded in the core of Boston, and less suited to getting a zoomed-out picture of the whole network.

(And yes, the map’s representation of the Silver Line, in the southeast part of this slice, makes me a little seasick.  It seems to be saying that the Silver Line – Green Line connection, at Boylston, works in only one direction.  In fact, the Silver Line [a Bus Rapid Transit service] is really four lines, where the apparent figure-eight is two of them overlapping.  But there’s no way I’d know that from this map.)

You are here: Home › Boston: The “Rapid Transit and Key Bus Routes” Map