Downshifting into the holiday, here’s a bit of pure transit tourism.

Transit is often a source of frustration in Sydney, but no city I’ve encountered offers better transit options for getting into the natural world.  Sydney is ringed on all sides by spectacular national parks.   Most are served by the electrified outer-suburban train lines, which run usually every 30-60 minutes and deliver you to small stations right at a trailhead.  It’s remarkably easy to go for a long day of hiking, or even to launch a backpacking trip, without a car.  One of the longest day hikes I’ve ever done was 26 km along the coast of the Royal National Park just south of the city.  Using a train+ferry at one end of the hike and the train at the other, the whole trip was possible, and even pleasant, on transit. 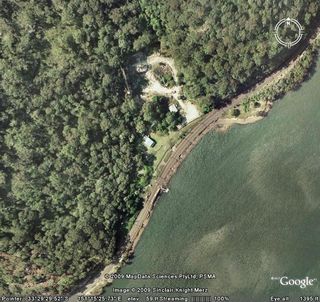 On Saturday, as part of a long day of hiking in Brisbane Water National Park just north of Sydney, I had occasion to use what some claim to be Australia’s smallest railway station, Wondabyne.  It’s at the center of this Google Earth image (easily found as “wondabyne, nsw, au”).

Wondabyne is the only station on Sydney’s huge rail network that cannot be reached by car.  It lies on a stretch where the tracks follow the shore of an ocean inlet. The station has the water on one side, and steep wild hills on the other, but no roads.

In Australia, a named dot on the map is no guarantee of a town.  The “suburb” of Wondabyne consists of a small quarry hidden in the bush, a couple of houses, a simple wooden dock suitable for fishing, and a
trailhead leading into the national park.  That’s it. 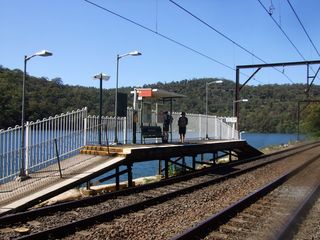 The platform is less than one car-length long; only the rear car of a train can open there, and only if someone requests the stop.

On the one hand, Wondabyne Station is a dreadful precedent.  We can’t possibly build a rail station to serve every possible rural destination, and you wouldn’t want to ride a train that might stop at all of them.

On the other hand, waiting for the train at Wondabyne, watching a sole fisherman at work on the little dock, listening to the birds and the waves, hearing no human sounds apart from automated train announcements and the conversation of my companions, it was possible to imagine I was in a post-automotive world, or at least a post-petroleum one.

Have a great holiday.  I’ll be back around January 2.

As Washington Shivers …
If You Like Intellectual Travel-Writing on Cities …

8 Responses to Holiday Greetings from a Post-Petroleum Moment

You are here: Home › Holiday Greetings from a Post-Petroleum Moment