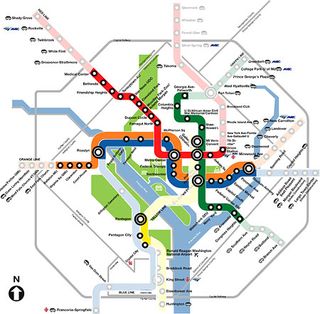 Anyone interested the transit effects of weather will appreciate this press release from WMATA in Washington DC, announcing the suspension of all above-ground transit services in the current snowstorm.

Metrorail trains will stop serving above-ground stations at 1 p.m.
today, Saturday, December 19, due to heavy snowfall that is covering
the electrified third rail, which is situated eight inches above the
ground. The third rail must be clear of snow and ice because it is the
source of electricity that powers the trains. Metro officials believe
that by 1 p.m. the exposed third rail will be covered by snow. All
Metrobus and MetroAccess service also will stop at 1 p.m. because
roadways are quickly becoming impassable.

(The release also includes this “snow map” of the rail network.  Faded-out segments are above-ground and therefore not operating.)

Those of us who work around government are often used to a certain guardedness and shadings of meaning in public announcements of agencies and politicians.  To us, such a simple and direct statement of the facts can feel like a blinding insight, much like the effect of sunlight reflected on snow.

13 Responses to As Washington Shivers …

You are here: Home › As Washington Shivers …