My friend Dale, a Portland poet and essayist, recently shifted his commute to downtown from car-and-sometimes-bus to usually-bicycle.  He’s posted “ten things I’ve learned after six months of riding a bicycle” (here, preceded by three interesting paragraphs on Jefferson and Adams).  My favorite of the ten:

9) It’s just as fun as when you were a kid. You go zoom! and whoosh!
You’re a sky creature, not a miserable earth-crawler. And you get to
the end of your commute feeling invigorated and intensely alive.

And I thought: Yes, transit has a zoom-whoosh problem.  Nobody today will describe the riders of the 14-Hawthorne bus (Dale’s other option) as “sky creatures.”  Indeed the 20th century bus operations model — lots of stops, one-by-one fare transactions, getting stuck in turnouts or behind parallel-parking cars — is the closest thing to “earth-crawling” that modern technology can offer at scale.

The most complete and authentic zoom-whoosh experience I’ve had on transit was the very first time I rode the Bay Area’s BART system, in 1976.  I was 14 years old and on my first trip to California from Portland, where I grew up.  It was also my first major trip alone.  I took the overnight Amtrak Coast Starlight train, and will never forget awakening at dawn somewhere near Davis and seeing (a) the flattest land I had ever seen and (b) my first signature California palm tree (Washingtonia robusta).  The palm was crucial; it signaled that I was arriving in a world that I had only seen on television, so I was prepared for everything to be bigger and more vivid, with lots of zoom and whoosh. 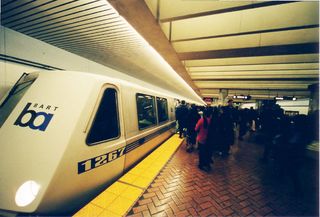 So of course I was a complete sucker for BART.  The phallic nose cones of the then-new BART trains were right out of The Jetsons.  The hexagonal-grid walls of the downtown stations recalled 2001: A Space Odyssey.  The ride was supernaturally smooth and quiet.  Did BART emit a deafening squeal on curves then, as it does now?  Either it did not, or more likely, my emotional memory of the zoom-whoosh experience edited out that detail.

Probably the highlight of the zoom-whoosh experience on BART — still available today — comes if you sit at the very front of the train, so that you enter stations at high speed — whoosh!  Arrival feels light, effortless, powerful.

Zoom and whoosh, of course, are a matter of scale and expectations.  To me as a boy, Portland’s Tri-Met buses seemed to whoosh, at least, if not zoom.  At major bus stops downtown, they flowed past in great numbers, groaning on departure but still whooshing a bit on arrival.  (Importantly, too, their signs announced destinations all over the city, as though offering me choices.  This childhood conditioning may be part of why I’ve never feared connections, because great connection points are sites of choice, and thus can convey a sensation of freedom.)  Watching the Portland transit mall as an adult, I still see that advertising-of-choice as a crucial feature of the experience, but I admit that I no longer sense much whoosh.

BART also suggested that zoom and whoosh could come apart.  The phallic nose cones were meant to suggest airplanes and rockets and sports cars, things that zoom.  But the word zoom clearly comes from the sound of internal combustion.  We may soon have to give up zoom, let it fall away like the first stage of a rocket, and learn to appreciate the quieter pleasure of whoosh. 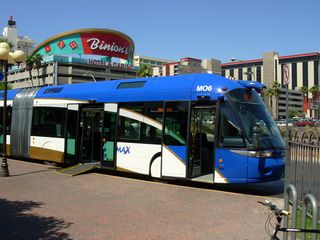 For now, though, the zoomy phallic noses are still with us, popping up wherever a transit technology is trying to look modern.  In the US concept of Bus Rapid Transit, such as the Las Vegas MAX pictured here, it often seems that we are to tolerate a lot of compromises in service as long as the bus itself is sexy, and that usually means a sleek (“whoosh”) paint-job and the same rounded, protuberant front end.

Even some modern streetcars have embraced the look, even though they never go fast enough to whoosh, let alone zoom.  In fact, when a mixed-traffic streetcar is stuck behind a car trying to parallel-park (thus making the motorist anxious, so that she is even worse at parallel-parking than usual), you might even call it an “earth crawler.”

Photo of BART A-car by Dennis Mojado via Wikipedia