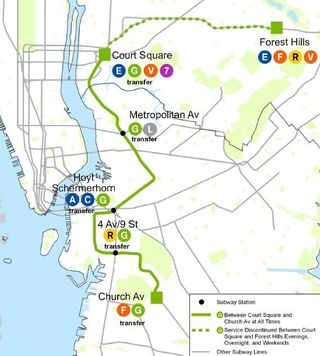 The U.S. service cut epidemic — the result of transit agencies relying on recession-sensitive funding sources — is about to touch New York again.  But as in the first round of San Francisco cuts, the New York MTA planners are doing their best to reduce service but not the abundant access.

As with everything in New York, the details are complicated, but here’s a simple example.  The G subway line is the only line running directly between Queens (the top of this map) and Brooklyn (the bottom).  It has long included a segment from Court Square to Forest Hills where G trains run alongside two other subway lines, the E and V which connect Queens directly to Manhattan.  (Full subway map here.)

In happier times, a transit agency could indulge the preferences of people from Forest Hills who want to get to Brooklyn without having to change trains.  But when service needs to be cut, it’s far better to cut this duplicative segment than to cut a segment that is somebody’s only service.  And that’s usually the real-world choice.

So in future, the G will run only as far as Court Square, and passengers who want to get to/from Forest Hills and Brooklyn will need to use the E or V between Court Square and Forest Hills, then change.  But as a result, frequencies and unique services will not be cut as much as they would have been otherwise.  That’s the only way to get through a service cut without reducing the abundant access.

Full coverage of the service cuts is at Second Avenue Sagas, which often features thoughtful and detailed commentary on New York transit issues.  Thanks to Alon Levy for the tip.