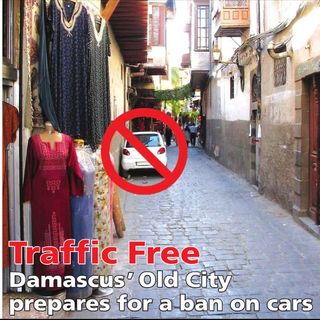 The Syrian newspaper Baladna launched a new English edition in December.  The first issue is on the web, and features a story about the Damascus mayor’s plan to ban cars from the narrow streets of the old city.

If Syria is an alien place to you, this article will make it feel utterly familiar.  In the interviews with restaurant owners, shopkeepers, and tourism operators, everyone says exactly what they would say if this were proposed in any other city in the world.

On some level, every city wants to believe that its transport issues are local, special, distinctive, when in fact the same issues can be found all over the world.  Most transport issues arise from basic problems of geometry and economics.  Your city may be a unique and wonderful place, but unless you’re inventing new geometry or economics, your transport problems will probably look pretty familiar to a traveling consultant like me.

Example:  Inner cities built at a pedestrian scale do not have room for everyone (or even most people) to take 12 square meters of real estate for their car, unless of course these cities are largely abandoned.  That much is just geometry.  The basic elements of urban economic activity are also more similar than different.  Every city needs a range of transport options at different time/cost tradeoffs, and also needs to handle deliveries, all within streets that are valued as places more than as transport facilities.  So it shouldn’t be surprising that the debate about closing streets to cars sounds pretty much the same from one culture to another.

A later issue of Baladna (apparently available only in print) features a plan to replace microbuses with fewer larger buses — also a common reform happening throughout the developing world.  The over promising is also common:  The “ministry expects the capital to be … traffic jam free by the end of next year.”

UPDATE:  Commenter Alon Levy asks a good question:  Is this a translation of an Arabic article, or an article composed specifically for English readers?  I was assuming it was the former, and that the comments recorded were translations from conversations in Arabic.  But it occurs to me that the people interviewed — mostly in tourism, restaurants, shops — might all speak English, and that this might have been a distinct piece of journalism pitched to the British- and American-trained expectations of Anglophone readers.  If you read Arabic, please look for an Arabic equivalent of this article, from early December, and let me know.

10 Responses to Damascus: Cars Banned from the Old City

You are here: Home › Damascus: Cars Banned from the Old City