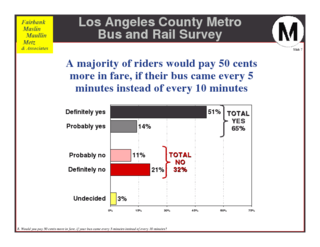 Do your city’s political leaders understand what funding sources people would support if they knew what they were buying?  A few weeks ago, the Source (a blog by the Los Angeles transit agency Metro) reported on a survey showing that current riders would pay 50c more in fares for a doubling of their frequency of service.  This isn’t as encouraging as it sounds, because a doubling of frequency, even with significant ridership increases as a result, will cost a lot more than 50 cents per new rider.  But it’s a useful soundbite.  These questions, broadly called “willingness to pay” questions, need to be asked more, and more probingly.

In the recent Sydney Morning Herald Inquiry into Sydney public transport, we did some deep probing of public opinion on willingness to pay.  Our survey experts at the University of Sydney’s Centre for the Study of Choice took 2400 randomly selected people through a series of questions designed to observe the value they attach to different kinds of public transit improvements, what taxes or fees could be higher, and by how much, if the money were clearly going to those improvements.  The methodology, called a discrete choice experiment, is designed to avoid some of the usual biases in these questions.  The method and its results explained toward the end of Chapter 1, here.

Ultimately, these findings determined the shape of our recommended 30-year investment plan.  The most fundamental recommendations are (a) that Sydney needs  a major transit investment program, funded largely by a range of increased state taxes and user fees, and (b) the plan must be dominated by transit, not roads.

We made these recommendations not just because of our own analysis and desires, but because that’s the overwhelming preference of the public.  Throughout the project, we recommended only things that could be funded using sources that, according to the survey, would get majority support, if the funding was clearly tied to the improvements.  We concluded that if voters could vote up or down on that package of fees and taxes, to be used exclusively to build the specified transit lines, a majority would say yes.

For better or worse, Australians are not used to voting on specific initiatives.  There have been national referenda on major national issues, including famous ones such as the granting of full rights to Aboriginals (passed in 1967) and the creation of a republic in place of the British crown (defeated in 1999).  But there is no precedent for voting on state and local issues like how to fund the construction and operations of transit.  Most Australian transit agencies are not separate governments entitled to certain funding, as they typically are in North America.  Instead, transit is managed by state government direction.  It’s just one of many things funded out of the state’s general revenues, and the elected government decides how that revenue is spent.

During the last year, watching the state and local budget crises across the United States, I’ve come to appreciate the stability of the Australian approach.  Popular votes on specific taxes and spending have tied the state of California in knots, to the point where the task of government is almost impossible.  American transit agencies that rely on a specific tax, usually some form of sales or payroll tax, experience huge swings in revenue, so at least once a decade they find themselves slashing service.  This doesn’t happen in Australia, or at least not as visibly.  Service doesn’t improve dramatically in better times, and isn’t slashed as badly when times are bad.

But the Australian system is not so good at expressing a public consensus to raise taxes and fees for a specific purpose.  Such a consensus clearly exists in Sydney to move forward on major transit investment.  If the voters could set up a funding stream to do this and an agency tasked with doing it, as would happen in many American states, then we would be on our way.  Instead, we have to wait for one of the competing major parties to embrace such an investment plan.  The parties, however, aren’t focused on the whole of public opinion; they’re focused quite narrowly on marginal seats, the relatively small number of voters whose judgments will turn the election, and this is a very different polity than the city as a whole.

Sooner or later, I suspect Sydney will need to have some sort of referendum to put the funding sources in place to fund a decent transit expansion program.  Based on our work in the Inquiry, which assessed the public’s willingness to pay and then crafted an infrastructure plan to fit it, such a referendum could pass.   But I certainly don’t see the way to that in the Australian political system, nor does either of the major parties seem ready to take the lead.

5 Responses to Willingness to Pay for Transit Improvements

You are here: Home › Willingness to Pay for Transit Improvements