Los Angeles Mayor Antonio Villaraigosa’s campaign to accelerate the construction of rail transit in his city is deservedly in the news, not just for his own persistence but also for the excitement it’s generating in the Obama administration, in Congress, and in other cities who would love to see a precedent-setting response.  But it’s also very useful and inspiring to transit planners working overseas, like me. 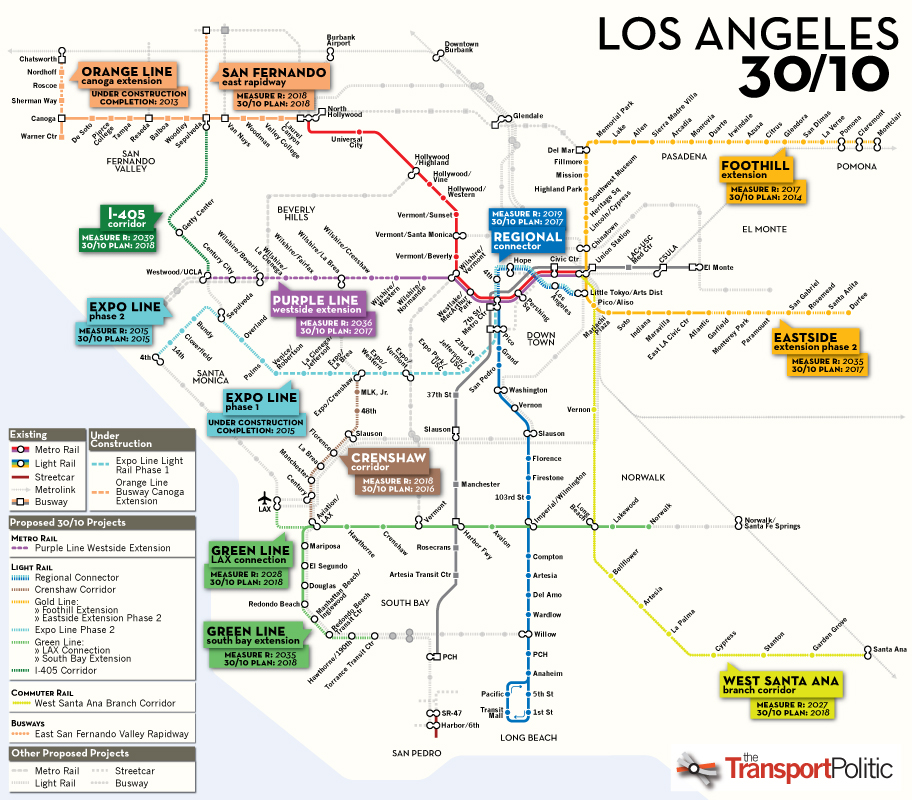 When I talk about North American public transit to people here in Australia or New Zealand, I don’t talk much about New York or Boston or other old cities where the depth of urban history approaches that of Europe; Australians and New Zealanders already know Europe better than most Americans do.  I talk a bit about Portland, because of its land use laws, extensive light rail, and special downtown.  I talk about Vancouver, because of SkyTrain, and its growth management, but above all because of its dramatic densification over the last few decades.

But when I really want to surprise them, and shift their thinking, I talk about Los Angeles.  Educated Australians, like educated Europeans, have mostly been there as tourists.  They remember it with the kind of fascinated delight that could just as well be called horror.  Even if they haven’t been there, they know it as the car capital of America, the city they’d least think of as the next great transit metropolis. 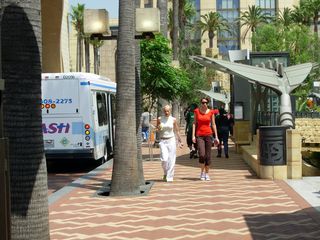 Los Angeles may still seem hopelessly car-dominated today, but it’s fortunate in its urban structure in ways that make it a smart long term bet as a relatively sustainable city, at least in transport terms.   Two things in particular: (a) the presence of numerous major centres of activity scattered around the region, and (b) the regular grid of arterials, mostly spaced in a way that’s ideal for transit, that covers much of the city, offering the ideal infrastucture for that most efficient of transit structures: a grid network.

Because Los Angeles is a vast constellation of dense places, rather than just a downtown and a hinterland, it’s full of corridors where there is two-way all-day flow of demand, the ideal situation for cost effective, high quality transit.  In this, Los Angeles is more like Paris than it is like, say, New York.  Much of the core area between downtown and Santa Monica is covered by a braid of major boulevards, all with downtown at 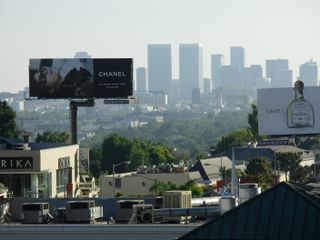 one end and the naturally dense coastal strip at the other, every one a potentially great transit market given appropriate protection from traffic.  Near the coast, the massive dense nodes of Westwood/UCLA and Century City (and to a lesser extent Santa Monica and Venice) offer further anchoring to the western end of these markets.  On a smaller scale, similar anchors are found throughout much of the region.  While gathering people to a transit stop will still be difficult, it will be especially easy to grow an everywhere-to-everywhere network in Los Angeles, becuase of these patterns.

The low-end but extensive network of frequent limited-stop buses, the Metro Rapid, grew from this geography.  Someday, the busiest rail transit lines in the American West will prosper from it.  One of the most interesting long-term questions about Los Angeles is how to fit high-quality transit to a city of great, wide boulevards — another crucial feature in which the city resembles Paris.  Sooner or later, most of these boulevards will need to give over two lanes to crowded and efficient transit services, which will move far more people per hour than car lanes do.  But there is much fun and quarrel to be had working out the details.  (Light rail or buses?  Side lanes or center lanes?  Stations configured how, in what relation to the streetscape?  Local or rapid stops?  The questions abound.) 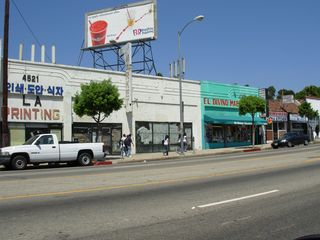 Densities in many places are lower than ideal, but Los Angeles, more than any city in the world, has a virtually inexhaustable supply of infill opportunities, even if typical middle-class and wealthy suburbs are set aside.  If a divine hand prohibited the paving of one more square inch of California, the Los Angeles region would keep growing without a pause.

Finally, of course, Los Angeles has built a strong consensus about the desperate need for transit.  This is the story that impresses foreigners.  Every television viewer in the world has seen images of Los Angeles and what life is like there.  And one thing they’ve all been shown, over and over, is that this is a city for cars, a place where cars mean freedom, and your car is your most important fashion statement.  When I tell them that the popular mayor of Los Angeles is spending major political capital on a campaign to accelerate transit development in his city, to the point of demanding a complete rethink of how the Federal government funds transport projects, eyebrows shoot up.  It’s one of those little jolts that can change our notion of what’s possible, wherever we are. 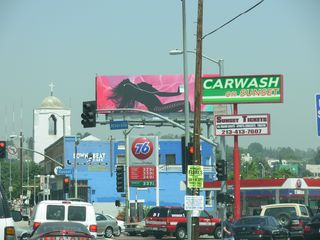 If I ended there, Los Angeles transit advocates would ask me why I don’t talk about everything that’s still wrong.  Do I tell people that Los Angeles still struggles with institutional tangles between the countywide MTA and the cities, especially the municipal bus companies?  Do I even make clear that Mayor Villaraigosa doesn’t control the transit agency, and has nothing like the presumptive powers that Ken Livingstone wielded in London?   Do I go into the ways that the Los Angeles transit system, while deeply dependent on connections, still charges for transfers on single-trip rides (though not on same-day round trips), a petty legacy of security problems around transfer slips?  Sometimes, for audiences who want to delve, I do go into those details.

But most great cities look better from a distance.  The compromises and hesitations built into the Metro Rapid diminish but don’t erase the importance of the Rapid as a precedent for creating a lot of new mobility fast.  The unfortunate transfer penalities don’t contradict the wisdom and efficiency of the grid system.  The compromised alignments of some light rail lines don’t undermine the case for rapid rail investment, nor for the balance between heavy rail, light rail, and busways in the re 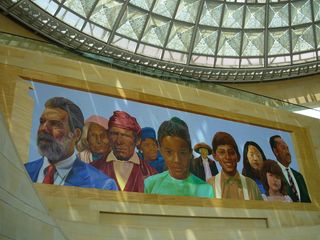 gion’s plans.   There are very few inspiring transit services, anywhere in the world, that don’t look more problematic to the locals who deal with them every day.

The big-picture Los Angeles talking point is still an inspiring one:  The most aggressive mayoral transit advocacy in America is coming from the nation’s most car-oriented big city.  And because film and television will always tell this city’s story to the world, the rise of transit in Los Angeles will be a globally resonant event.  Is anyone studying how film and television images of how people travel in Los Angeles are evolving over time?  Those things really matter.

Illusions of Travel Time in Transit Promotion
Los Angeles: The “Psychology of the Place”?

35 Responses to Los Angeles: The Next Great Transit Metropolis?

You are here: Home › Los Angeles: The Next Great Transit Metropolis?