Responding to my post on Los Angeles as a transit metropolis, Atrios on the Eschaton blog speculates that the fate of transport in Los Angeles depends on three things, two of which are matters of “the psychology of the place.”

Contrary to popular perception, much of LA is quite dense and a hell of a lot of people use mass transit. And if the mayor gets his way, more better transit is coming. I think two things make it difficult for LA to be a great transit city. The first is simply the psychology of the place. People really don’t think anything about driving an hour in any direction. It makes the set if potential places – retail, friends, whatever – one might visit quite large. The second is that while LA is actually quite dense, in much of the city it’s a very even density. Light rail and subway systems are more useful if things are clustered around stations. …

I guess there is a third thing, that despite having all that lovely weather people are strangely allergic to walking.

“… despite having all that lovely weather people are strangely allergic to walking.”

Atrios is suggesting that the lack of walking must be something about “the psychology of the place,” because it doesn’t make rational sense given the nice weather.  But the lesson of the FAE is that whenever we’re about to judge someone’s behavior to be nonrational, we should ask:  “Wait, what if these people’s strange behavior is actually an entirely rational response to a situation that I don’t fully understand?” 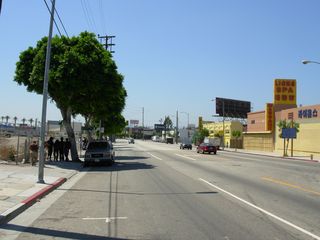 A lot of Los Angeles is still not pleasant to walk in.  Places that are, such as the more successful commercial strips, do have lots of people walking.  So a shortage of pedestrians reflects rational responses to the situation.  People do walk where pedestrians are welcome and where there’s enough density that people can get things done within walking distance.  But much of LA is still not like that.

And what about the weather?  Why don’t people walk in Los Angeles when their weather looks so lovely to a blogger shivering in the northeast?  Because if you know Los Angeles you know how brutal desert sun can be.  Notice that the only pedestrians in this photo are huddling in the only patch of shade.  In fact, they’re sheltering exactly the way groups of pedestrians shelter under an awning in the rain.  So if you’re a shivering northeasterner, you may not understand the Los Angeles situation until you see that sun there is something like rain is for you, an uncomfortable sensation that you want some protection from.  (Los Angeles is planting a lot of trees, but unsheltered desert landscapes like the one above are still common.)

Ultimately, that kind of analogy — “this person’s situation is kind of like how I would feel if …” — is one of the key tools for moving beyond FAE and actually building understanding of the situations that other people are in.  That, and just holding open the idea that their situation may be different from how you imagine it would be for you.

14 Responses to Los Angeles: The “Psychology of the Place”?

You are here: Home › Los Angeles: The “Psychology of the Place”?