A recent post looked at the challenge of surveying the public and identifying what mixture of taxes and fees they would be willing to pay to fund a widely desired infrastructure plan.  In the Sydney Morning Herald‘s Independent Inquiry into public transport in Sydney, we did exactly that, using a survey team from the University of Technology at Sydney’s Centre for the Study of Choice.   One commenter caught the crucial point about why polling is so difficult, and why its results are often hard to trust:

Infrastructure projects are all based on assumptions about how people will behave in the future.  To talk about those, we can talk about revealed preference from other places.  For example, we can quote ridership on one transit line as a reason to expect ridership on another.

But for a city like Sydney, which cannot dream of the kinds of Federal funding that US cities are used to, the real question is what people will tolerate paying — in taxes, fees, fares, and road charges — to fund a system that they support.  And for that, we have to ask them.  We’re asking them about a hypothetical:  “What would you be willing to pay if …?”   We’re stuck with stated preference data, and most of it is worthless.

You’ve probably done stated preference surveys.  In our business, they ask questions like “Would you ride transit more if …?”  or “Would you support a tax increase of $x to fund this rail project?”   Most people have no idea.  The question may not accurately describe the factors that would really determine their actual response.  They may not understand what the funding sources (tolls, fares, etc) would mean in their lives.  So people guess.  They make stuff up.  They say what they think the surveyor wants to hear.  They give different answers depending on the sequence in which the questions are asked.  They generate mounds of meaningless data.

So we (or rather our survey experts at the University of Technology, Sydney) tried something a little more subtle, called a discrete choice experiment.  It turns out that if you aggregate a lot of stated preferences from the same person, they can add up to something like a revealed preference.

We wanted to find a combination of funding sources that would attract majority support and be adequate to fund the investment program.  Rather than just ask people single hypothetical questions, we asked each person about a whole series of scenarios, each with different combinations of funding sources.  We compared a “high investment in public transport” scenario, which we already knew to be the most popular, with a “high investment in roads” scenario and a “low investment in both” scenario.  Respondents went through about 10 of these.  They were asked to identify which scenario they preferred, but each time the specific funding sources and levels were different.  Here’s what just one of the questions looked like. 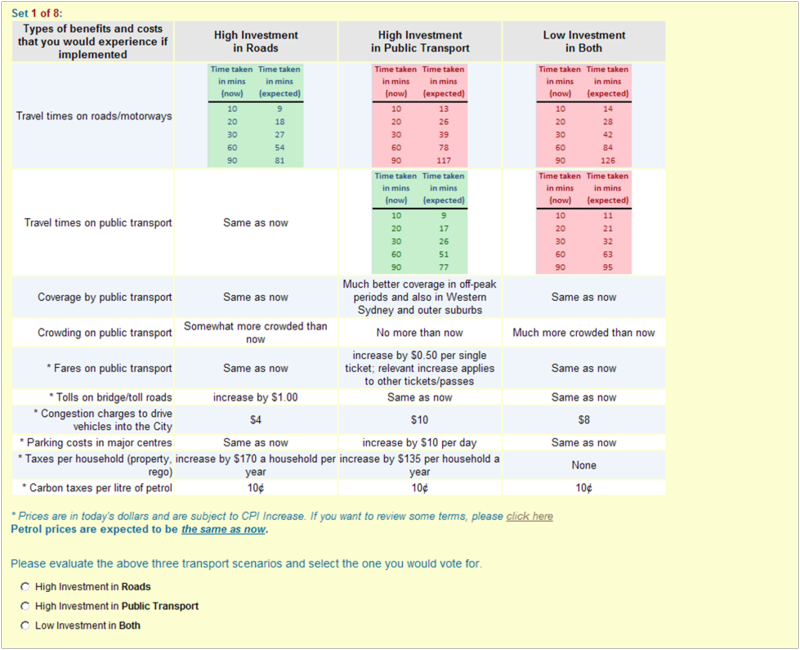 (Obviously, this has to be done on the web rather than over a phone.  Our survey “panel” was 2400 people who are used to doing surveys on the web, but who are, in all other respects, strictly representative of the entire population in terms of age, gender, income, and all the other usual demographics.)

By asking a person to think about a range of different scenarios, the survey could observe the funding  levels that were the end of each person’s tolerance.  If one respondent tended to support the high-public-transport scenario except in cases where the fare increase required was more than $1, we could conclude that this repondent was saying, in effect “I support fare increases up to but not beyond $1 to fund the high-public-transport program.

The key idea of a discrete choice experiment is that instead of asking people what their highest tolerable rate would be, it observed them making the choice.  Essentially, discrete choices experiments create an environment in which a stated preference can emerge as a revealed preference, something we see in a person’s choices but not something we need them to be able to explain.

The results were pretty cool. We did find a mix of funding sources that got bare majority support and were sufficient to fund the infrastructure program.  We actually found a range of them, each supported by a slightly different majority group.  I’ll talk more about them in another post.

The Most Important Blog Post You’ll Read This Year … (Updated!)
Does High-Density Life Have a Bigger Ecological Footprint? And Why?

4 Responses to Public Surveying: The Quicksand of Hypotheticals

You are here: Home › Public Surveying: The Quicksand of Hypotheticals