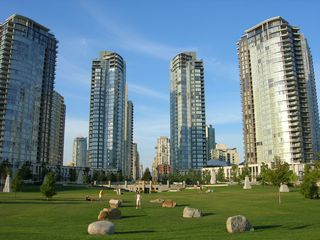 Over at New Geography, Joel Kotkin has a new broadside against high-density inner city life.  It’s called “Forced March to the Cities,” presumably to feed the right-wing talking-point that urbanism and planning are totalitarian.  Here’s the part that’s supposed to scare you:

… [A]cross the country, and within the Obama Administration, there is a growing predilection to endorse policies that steer the bulk of new development into our already most-crowded urban areas.

Over the next 40 years this could result in something like 60 million to 80 million people being crammed into existing central cities. These policies work hard to make suburban life as miserable as possible by shifting infrastructure spending to dense areas. One proposal, “Moving Cooler,” outdoes even Lowenthal by calling for charges of upwards of $400 for people to park in front of their own houses.

The ostensible justification for this policy lies in the dynamics of slowing climate change. Forcing people to live in dense cities, the reasoning goes, would make people give up all those free parking opportunities and and even their private vehicles, which would reduce their dreaded “carbon imprint.”

He goes on to argue that urban development’s footprint is actually higher.

Yet there are a few little problems with this “cramming” policy. Its environmental implications are far from assured. According to some  recent studies in Australia, the carbon footprint of high-rise urban residents is higher than that of medium- and low-density suburban homes, due to such things as the cost of heating common areas, including parking garages, and the highly consumptive lifestyles of more affluent urbanites.

His link is to a 2007 Australian Conservation Foundation (ACF) study “Consuming Australia” on the impacts of consumption in different parts of the country.  The very readable summary report (only 17 pages!) makes several important points about consumption, most of them also true of the US and Canada, but its point is more nuanced than Kotkin’s. I suspect its authors would be offended to be cited as implying that urban infill is bad for the environment. (UPDATE:  Yes, ACF is definitely offended.  ACF’s Charles Berger replies to similar misuse of his study here.  Thanks to Daniel for the link.)

The first ACF finding is this:

Here is the report’s graphic showing the eco-footprint of an average Australian household: 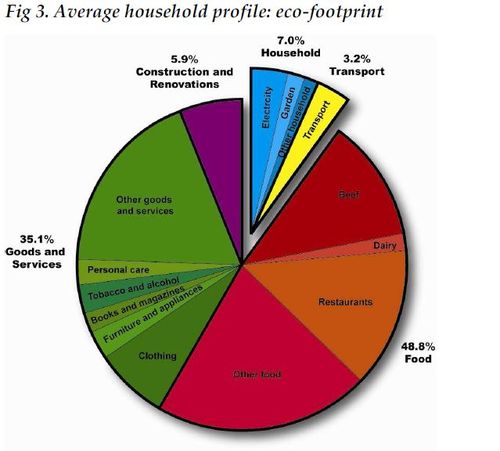 The point here is that most of our environmental impact is not from the land, water, and power that we pay for directly, and the emissions that result.  Most of our footprint is from the land, water, power, and emissions associated with the creation and transportation of things we consume.  Most of our transport costs and impacts, for example, are for moving things that we buy, not for moving ourselves. This does mean that those of us who are focused on personal transportation choices are affecting a small slice of the pie.

So it’s not surprising that when the report turns to urbanism, it finds that the ecological footprint of high-density living is mostly not because of the high density, it’s because of the choices of the people who live there.  Which brings us to the ACF study’s next point:

This point is what Kotkin wants to emphasize, but here’s how the ACF report actually describes it:

” … [D]espite the lower environmental impacts associated with less car use, inner city households outstrip the rest of Australia in every other category of consumption.  Even in the area of housing, the opportunities for relatively efficient, compact living appear to be overwhelmed by the energy and water demands of modern urban living, such as air conditioning, spa baths, down lighting and luxury electronics and appliances … “

So while Kotkin wants to conclude that inner-city life is intrinsically wasteful of resources, the real and quite different point of the study he cites is that resource-waste is a feature of affluent lifestyles, which are more concentrated in the inner city.  This suggests that high-density housing geared to lower price points — for example, by constructing a massive supply — would reduce the increase the income diversity of the population and thus reduce its average consumption.

But is there no more direct way that high-density living is wasteful of resources?  Yes, there is, and the ACF report goes on to explain it:

Here, I think, is a valid critique of much of the inner-city high density housing I’ve seen and lived in.  It is designed to serve a population of strangers, and to discourage neighbors from knowing and trusting each other.  In all the places I’ve lived in the US, Canada, and Australia, I’ve found it’s much easier to meet the neighbors across the fence, in a lower-density setting, than in a sterile apartment hallway or elevator.

We’re not going to change the fact that smaller households, such as singles and childless couples, are more attracted to high density.  Urban life is especially attractive in early adulthood.  Even setting aside the impact of affluence, smaller households mean more consumption per person, as the ACF study finds, and that’s a big problem.  Three people living in three apartments have to own three vacuum cleaners, while a family of three people owns only one.  So one of the ACF’s most crucial recommendations is simply:  “Share more.”

Efforts at creating a more communal experience of housing always seem to collide with a market where people want privacy and control.  But would there really be no market for a highrise development in which each floor had a small room containing an iron, an ironing board, and a vacuum cleaner, which anyone on the floor could use briefly as needed?  At some price points, would there really be no market for a return to the laundry room — again, one on each floor, rather than in each apartment?

To end on a lighter note, let’s return to Kotkin’s passing claim that the high consumption from high-rise development, as found in the ACF study, is “due to such things as the cost of heating common areas, including parking garages.”  This idea isn’t in the ACF study; it’s Kotkin’s interpolation.

I’ve lived in Australia for three years and have never seen a heated parking garage, nor even an air-conditioned one.   But Kotkin’s reference to the parking garage really makes an urbanist point:  If we had a carsharing system under every residential tower rather than a mandatory 1-2 parking spaces for every unit, we’d reduce our footprint and make the building more affordable.  It’s still the case, in much of the US, Canada, and Australia, that if you want to buy a modern high-rise apartment with no parking space, it’s hard to find.  I’ve looked.

Does high density life have a bigger ecological footprint?  From the ACF report, the answer seems to be “not necessarily, but affluence does.”  So I’ll end with the ACF’s advice to people with money:  “Buy fewer things, enjoy life more!”

Public Surveying: The Quicksand of Hypotheticals
A Personal Note on Today’s News …

82 Responses to Does High-Density Life Have a Bigger Ecological Footprint? And Why?

You are here: Home › Does High-Density Life Have a Bigger Ecological Footprint? And Why?