UPDATE February 2016:  While this post’s deep dive is valid enough, I would no longer agree with my past self that exclusivity of right of way is secondary in defining the difference between streetcars and light rail.  I no longer agree with this post’s claim that exclusive right of way is more important for longer transit trips than for short ones.  It is always a crucial driver of reliability, and its absence continues to be the defining features of what most Americans call “streetcars” as opposed to light rail. 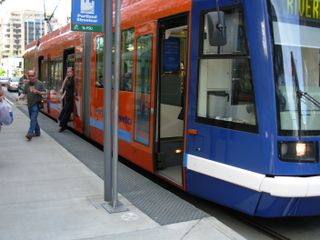 Yonah Freemark at The Transport Politic proposes a curious definition of the difference between streetcars (trams) and light rail:

The dividing line between what Americans reference as a streetcar and what they call light rail is not nearly as defined as one might assume considering the frequent use of the two terminologies in opposition. According to popular understanding, streetcars share their rights-of-way with automobiles and light rail has its own, reserved right-of-way.

But the truth is that the two modes use very similar vehicles and their corridors frequently fall somewhere between the respective stereotypes of each technology. Even the prototypical U.S. light rail project — the Portland MAX — includes significant track segments downtown in which its corridor is hardly separated from that of the automobiles nearby. And that city’s similarly  pioneering streetcar includes several segments completely separated from the street.

We’re all prone to lash out at “popular understanding” now and then, often without citing a source for it.  I certainly know I do that.  But for the record, I don’t think the dividing line between streetcars and light rail can usefully be drawn where Yonah suggests, based purely on the exclusivity of the right-of-way.

Light rail and streetcar technologies are, as a whole, more similar than different, but the terms as I hear them used belong to different categories of usefulness to the customer.  I use the term light rail to describe something that’s at least attempting to be rapid transit, by which I mean covering long distances fast by serving fairly widely-spaced stations rather than closely-spaced local stops.  The term “light rail” was invented specifically for the contrast with “heavy rail,” which is a competing alternative for the same relatively long corridors.  Light rail often makes closely-spaced stops right in downtown, and may thus serve a “streetcar” function there, but it does this mainly for the purpose of providing good access to people who want to use its higher-speed segments.    I refer to streetcars/trams only when I mean local-stop services, designed to do pretty much what local buses do.  (Such services are usually no faster or more reliable than a local bus.)

Exclusivity of right-of-way is an independent issue, but I think it’s clearer to understand this as a consequence of the original usefulness distinction.  Longer trips are more sensitive to speed and reliability than short trips, partly because these trips don’t have the option of walking.  If Portland’s light rail line MAX doesn’t show up at your suburban station, you’re stranded.  If you’re already downtown and the Portland Streetcar doesn’t show up, you start walking.  A common complaint about transit in Melbourne is that the extensive tram system is still the main way of making some fairly long trips, such as between downtown and LaTrobe University, and its local-stop operation makes it simply too slow to be widely attractive in such a market.

Toronto, which already has very local-stop and slow streetcars downtown, is now proposing a “light rail” network called Transit City.  Their explanation of it begins:

Toronto already has heavy-rail subways, so that’s what locals will visualize when they hear “rapid transit.”  The agency clearly wants people to think of these new lines as an extension of the subway system, not an extension of the inner-city streetcar system.   For that reason, they’re insistently calling it light rail rather than streetcar.  The difference is first and foremost that the Transit City light rail will serve widely spaced stations, like the subway, not closely spaced stops, like the existing downtown streetcars.

This long distance service intention is what drives the insistence on exclusivity, which is why the long-distance intention, expressed first of all in stop spacing, is the more fundamental distinction.  If you’re serious about trying to provide rapid transit service over a longer distance, such as between a city and its suburbs, you’ll insist on exclusive right of way for the vast majority of the distance, sometimes with the exception of short segments downtown where the options are difficult.  Again, urban light rail services can look rather like streetcars as they run locally through downtown, but (a) their right of way is usually if not always exclusive and (b) they are mostly collecting/distributing trips that will use the fast segment, whereas on a typical streetcar/tram the local-stop service is the entire product.  Both of those features follow from the original intention: be useful for long-distance travel, at least into the downtown.

The streetcars/trams that I know, both historic and modern — in North America, Australia, and Europe — are almost all local-stop.  A few may have some relatively rapid segments across parks or stretches of old rail corridor, such as Melbourne’s Albert Park and Port Melbourne segments, but these are the exception.  They are usually also mixed with traffic for a large share of the distance, which means they are easily disrupted by traffic-induced delays.  It’s common to see them take exclusive lanes where they’re available, such as in medians of wide boulevards, but they are designed with the presumption that mixed flow is acceptable where exclusive lanes can’t be found.  That’s because (a) streetcars/trams are competing for short trips and (b) new streetcars especially are driven by a redevelopment agenda, where proponents are often frank that triggering the development outcome is simply more important that the usefulness of the service as transit.

Finally, when I suggest that stop spacing is the best way to distinguish light rail and streetcar — and is already functioning this way in a great  deal of existing usage — I’m not implying that everything is one or the other.  There are, as noted, streetcars that have short light-rail-like segments and light rail lines that have streetcar-like segments.  These terms define ends of a spectrum, in which a large share of examples are purely one or the other but there are many (especially in Europe) at various points or mixtures in between the extremes.

I suggest that the most useful categories are those that refer to different kinds of usefulness to the customer.  Stop spacing — wide stops for rapid operation — makes light rail useful for longer trips, and that’s the most critical usefulness distinction.  This is why you rarely hear about “light rail” vs “streetcar” debates for a specific designated corridor.  The two terms refer to broadly the same technology, but the length of the corridor, and the speed it requires, usually determine whether we’re talking about rapid transit, in which case this technology’s offering is called light rail, or more local-stop service, in which case this technology’s offering is called a “streetcar.”

43 Responses to Streetcars vs Light Rail … Is There a Difference?

You are here: Home › Streetcars vs Light Rail … Is There a Difference?