Samuel Scheib is the senior planner at StarMetro (Tallahassee, Florida) and the editor of Trip Planner Magazine: the art and science
of transit.  He holds a master’s degree in planning from Florida State University, as a Transit Fellow.

Parking was one of the earliest problems associated with the widespread automobile ownership that began in the 1910s and 1920s; having a place to leave cars—the terminal capacity—is as important to the transportation system as the carriageway that moves them.  By the 1930s, urban streets were filled with cars that were driving in circles searching for curb parking.  The accepted solution to this congestion problem was off-street parking.
Soon, cities around the United States had enshrined off-street parking requirements in their zoning laws.  According to Donald Shoup (The High
Cost of Free Parking) a 1946 survey found that only 17% of the cities in the study had zoned parking requirements; just five years later that percentage was 76.  Today free, unlimited parking is the expectation for most drivers:  parking is free for 99% of all automobile trips in the U.S.

The type and design of unlimited, off-street parking can only be described as the greatest missed opportunity in the history of transportation
planning.  Without documentary evidence I can only imagine that the first shopping centers and other structures that boasted off-street parking were doing exactly that: having the parking in front was the best way to show it off.  It is arguably easier to park in front of a building than behind it, but only by the tiniest degree of difficulty; driving an extra hundred yards is far easier than walking that distance.  If transportation planners had been able to peer ever-so-slightly around the corner of history they might have realized the potential of what off-street parking would later reap.  If the zoning had specifically required off-street parking and maximum building setbacks (that is to force the buildings to be located within 20 or 30 feet of the carriageway) our nation would look completely different today.

Would people still want to buy and drive cars?  Yes, but if the buildings were near the street (as they were in Çatal Höyük, ancient Athens, Rome, Constantinople, the great cities of Europe, and American cities east, west, and central built before 1930) other modes of transportation would have remained viable — and most importantly conventional – compared to the automobile. 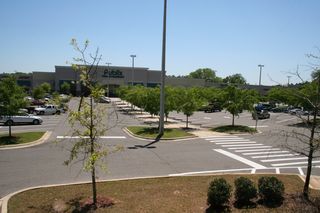 Conformity is never so welcome as in the transportation sector, and misery never more alone.  Anyone who has ever had the misfortune to walk along a big-box, sidewalk-free U.S. highway knows that as depressingly ugly as this public space is, the worst part of the experience is the exposure, the feeling of
being the lone freakish pedestrian on Planet Auto.  Even those of us who are strong transit advocates may recognize–when we are completely honest with ourselves–that when we are in our cars and see people walking in these hostile environments we have the knee-jerk thought that there must be something wrong with that person:  Poor?  Homeless?  Mentally ill?  Mode choice can be the source of scorn or pity.

Were those parking lots behind the structures, several things would have happened.  First, we would have preserved blocks and polygons.  They may have been larger than the ones that preceded them in the 19th century, but the corner lot would have retained value and each side of the block, rather than just the front, would have had importance.  Second, parking would be shared. 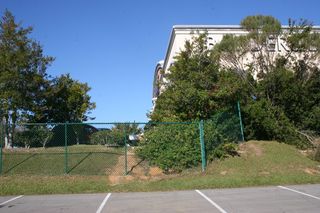 Today it is not uncommon to see fences between the side-by-side parking lots of big box stores.  (The fence in this image protects the shopping of a Border’s Books from the adjacent Office Depot.)  Not many people walk between them anyway, and certainly not between two or three stores, a distance
of a half mile or more in the ugly and hostile environment, but the store providing ample parking does not want to share with the guy next door who has fewer spaces.  That cooperation would have happened in the block system; a shared parking lot would have made access to four buildings (or more) easy and convenient and those property owners would have bought and sold spaces as a percentage of the floor space, or by some other formula.  However accomplished, business owners would have recognized the value of that shared commodity just as the contemporary merchant knows the importance of an attractive, shared atrium/corridor inside the shopping mall.

Third, and most important, the urban streetscape would have been preserved.  Not only is transit–and by extension walking–most effective in this environment, but the proximity of the buildings to the street would have forever prevented the 8-laning of America.  The costs of widening would
have been exorbitant because municipalities would not have been buying just land (land that may have constituted drainage ditch anyway), but they would also have had to buy and destroy the buildings atop the property. 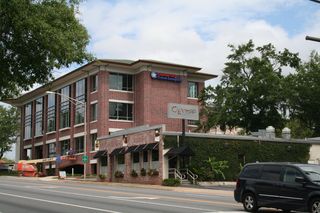 (In this Tallahassee image, the small building in front is from the 1920s, while the new building behind it reflects new planning policies that encourage buildings adjacent to the street.)


City leaders and public works officials in cities as large as Atlanta (16 lanes of interstate in some places) and Los Angeles down to modest municipalities like Tallahassee have come to understand that they can’t build enough roads at low enough costs to solve our transportation problems.  Had the buildings not been so far apart, transportation planners and officials would have arrived at this conclusion far sooner, perhaps before the 1956 Interstate Highway Act.  Yes, engineers have widened urban streets often to within a few feet of the buildings, but they were widening the tip of the funnel, and had the pressure not come from far wider streets in the sprawl it is unlikely that road widening would have been the de facto solution to congestion.

Ninety percent of planning involves fixing the planning decisions of the previous generation.  Let the Big Dig (burying the old elevated central artery in
Boston) and urban renewal stand as exhibits one and two.  Perhaps the people who instituted those first off-street ordinances were guilty of looking only 20 years ahead.  They would have seen the problem those buildings near the road would have represented for future expansion.  But like the legendary frog who jumps out of hot water but boils in slowly heating water, earlier generations did not foresee 8-, 10-, 12-lane parking lots through the hearts of downtowns or those warnings on variable message displays to stay indoors because of poor air quality.  The off-street parking lot facing the street represented the acquiescence, the complete capitulation to, the needs of the automobile.  The greatest failure was the simplest thing, applicable to all areas of life:  Young planners, look ye farther ahead and always choose balance.  Nature abhors a vacuum, and the all-for-the-car attitude has yielded an appropriate field of horrors.

11 Responses to Guest Post: Samuel Scheib on Parking, the Field of Nightmares

You are here: Home › Guest Post: Samuel Scheib on Parking, the Field of Nightmares