David Lazarus’s Los Angeles Times column today lays out what everyone who’s studied the problem knows needs to be done.

He also mentions one idea that may be a bit more divisive among transit advocates:

Longer term, although I believe subways are best for
metropolitan areas, L.A. would probably be best served by an elevated
rail system — maybe a monorail, maybe something else. Elevated lines and
stations are significantly cheaper to build than subways, and it would
be relatively easy to begin with existing freeway routes.

For
example, an elevated track could run down the center of the 405 to the
10, make its way downtown and then loop up the 101 back to the 405. Once
that’s running, we build out from there. Getting a line to Los Angeles
International Airport would be very high on my to-do list.

I wonder if that bit was influenced by Steve Hymon’s recent survey of past monorail visions in LA.  Apparently there was a plan in 1960 for monorails along all the major freeways, and also on Wilshire Blvd.  It looked like this: 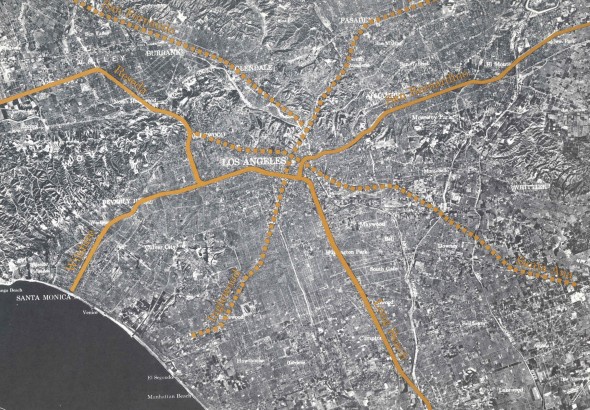 (From Dorothy Peyton Gray Library at Metro, via The Source)


Rail transit in freeway medians still presents major challenges for both land-use and customer experience, as explored here.  If the line is elevated over the freeway, as a monorail would be, you would have problems with siting stations, as they would need to be high above freeway interchanges, possibly quite a long way, both horizontally and vertically, from anywhere anyone might be going.

Still, it’s interesting to see this kind of thinking — especially the practical notions about bus lanes and funding — coming from a mainstream columnist.  None of it is his idea, but when you’re a columnist, anything can be your idea.

Confronting Words from U.S. Transit Administrator
Should We Redesign Our Bus Network? How?

You are here: Home › Los Angeles: Columnist’s Insight Solves Everything