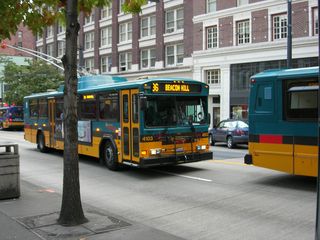 Seattle’s electric trolleybus fleet is wearing out, and the agency is studying alternatives to replacing them.  The transit agency, King County Metro, can’t be happy to have this issue flaming in the Seattle Times, whose headline, “Fate of trolleybuses hangs in the balance,” practically begs the reader to rush to the poor things’ defense.  (On such “endangered technology” headlines in general, see here.)

The case for trolleybuses is pretty clear.  They have no local emissions and minimal greenhouse impacts assuming that the electricity comes from renewable energy.  They are one of the quietest vehicles on any street.  And when it comes to the specific task of carrying large numbers of people up steep hills, they have no rival.  Even on the 15% slope of Queen Anne Avenue, with a full load, trolleybuses accelerate as easily as a car would do — a situation where any motorbus would crawl, emitting deafening groans.   Most of Seattle’s trolleybus network specializes in these high-volume hill-climbing tasks.

Seattle’s trolleybus fleet is expected to need replacement by 2014, and given the rapid changes in technology, and the relative high cost of maintaining trolleybuses and their infrastructure, it’s not surprising that the question of other technologies will arise.  Replacing trolleybuses with anything that looks and sounds like a motorbus is likely to be a non-starter.  Everyone who lives anywhere near a trolleybus line, and everyone who rides them and values their uphill speed, will be against it, even before you evaluate the generalized impacts (carbon emissions, oil dependency) that many people in Seattle care about.  Are there wireless hybrids that can achieve the same thing?  Possibly, but there are big risks in being an “early adopter” of a new technology in a large and crucial application.

While trolleybuses are clearly a winner in emissions and local-impact terms, they do present some problems to transit planners like me.  The big one:  They’re hard to revise, and expensive to extend.

Trolleybuses attract a particular kind of polarized NIMBYism:  Replace them with regular buses, and neighbors scream becuase of the noise.  Extend them, however, and different neighbors scream because you’re hanging wires on their street.  So trolleybus lines have a tendency to not change or grow.  They can become museum-pieces of network design — historic but not always making much sense for the city as it is today. 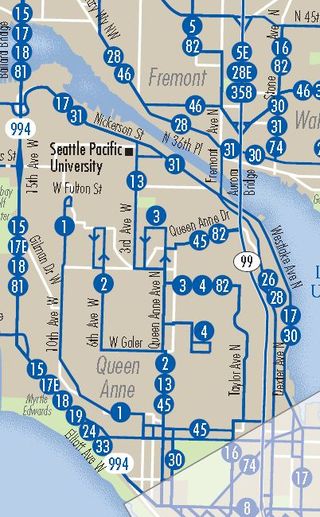 For example, here’s a bit of the King County Metro’s map of Queen Anne Hill and the surrounding area.  Downtown is the south edge of the image.  Lines 1, 2, 3, 4, and 13 are the trolleybuses.  (Ignore routes 45 and 82 in this image; they’re too infrequent to matter.)  Lots of motorbuses flow around the hill on the east, west, and north sides, but the trolleybuses do almost all the work of climbing the hill itself.

If these weren’t trolleybuses, however, they would almost certainly have been extended further so that they ended at major destinations or connection points north of the hill.  As it is, if you’re on the hilltop, say at the end of Line 2, and want to go to Fremont on the north edge of the map, you basically have to go downtown and back.

In designing the high-frequency policy network for the City of Seattle a few years ago, I also identified that Line 1 might do better to go down Gilman Drive and connect with a future Rapid Transit line on 15th Avenue West.  You can think about such things when you’re moving motorbus routes around, but when such a change involves hanging new trolley wire, it tends to never get done.

Like many of the key players at the City of Seattle, I have trouble imagining another transit mode that would beat trolleybuses for their low noise and emissions and their effective uphill acceleration.  Still, the new era of anxiety about climate change and “peak oil” is not leading to an explosive growth in trolleybus networks, partly because of the expense and NIMBY struggles involved in extending trolleybuses to new streets.  Sooner or later, though, we’ll need an alternative way to extend trolleybus lines to their new logical endpoints, which are often further, or different, than where they go now.

39 Responses to Seattle: The End of Trolleybuses?

You are here: Home › Seattle: The End of Trolleybuses?