Bravo to Chip Johnson of the San Francisco Chronicle for doing a column on Daniel Jacobsen’s Oakland Streetcar Plan, which was just released. 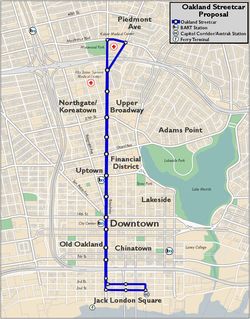 Jacobsen is an undergraduate at Stanford University who did the entire plan as a research project.  Drawing on the well-established literature of the US streetcar revival movement, including trips to Seattle and Portand to observe their streetcars, Jacobsen lays out a plan for a streetcar along Broadway, from Kaiser Medical Center at the north end to 2nd Avenue and the Amtrak station at the south end.  (The north end is very close to MacArthur BART station, and suggests the possibility of a Phase 2 extension west along 40th to this station and potentially on to the high-rise centre of Emeryville, just off this map to the left.)

As Johnson emphasises, this study was a very good deal compared to what consultants might charge:

Jacobson accomplished all of this, including travel expenses to Portland and Seattle, with a $1,275 grant from the office of the Stanford Vice-Provost of Undergraduate Education. But he spent only $987.

That’s pretty cost-effective, especially when you consider that Oakland city officials paid $300,000 for a streetcar feasibility study in 2005 and applied for an additional $330,000 in feasibility funds this year.

(To be fair, a few consultants are among the acknowledgments, so some of their expertise may have slipped in for free, much to Jacobsen’s credit.)

I have not read every word, but skimming it I’m impressed.  (I’ve also looked at the pictures!  A good consulting report must make sense to people who only look at the pictures, and Jacobsen’s does.)

Jacobsen is careful to position the streetcar in an appropriate place in the hierarchy of modes, rather than imagining that streetcars could someday go all over the city as they did in 1900.  This graphic, for example, is very helpful in making it easy to support streetcars AND Bus Rapid Transit, and to understand how both interact with longer distance modes such as BART and commuter rail. 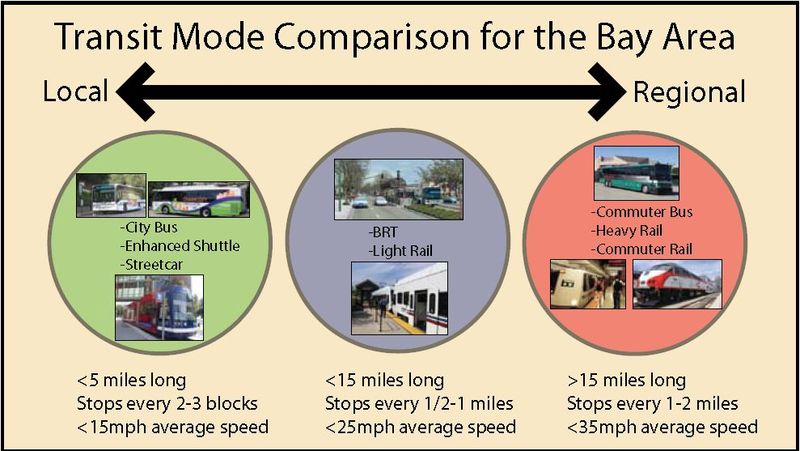 The extensive Bus Rapid Transit projects already planned for Oakland are described as complements rather than as competing ideas.

The proposal is not claiming to be a great innovation.  The streetcar boom promoted by the well-marketed Portland Streetcar has already produced nationwide proposals for similar services.  Jacobsen stays within the safe boundaries of that existing work.  He lays out all the standard arguments, and suggests the same Czech vehicle that Portland used.  But applying existing practice to a new city is still a lot of work.  Jacobsen has done a fair bit of that work, thinking through alignment, economic development impacts, and so on.  Much of the meat of the study is devoted to exploring developable land along the corridor to assess the potential for transformation along the scale of what occurred in Portland’s Pearl District.

If anyone expects me to attack the proposal out of some ideological aversion to streetcars, they’ll be disappointed.  Jacobsen positions the streetcar as an economic development tool, and does not make unreasonable claims about the mobility it will provide or bus services it could replace.  My critiques of streetcar-centric thinking have focused on the need to understand how little mobility improvement they provide when compared to high-quality bus routes.  (Streetcars that are promoted based on explicit denigration of buses can lead to political neglect of the bus system, and this can make them net reducers of mobility.)  Streetcars clearly have a near-term redevelopment impact; my only caution is that this impact — like all facts about the market — is the result of a complex aggregation of beliefs in the culture, and the one thing we know about culture is that it keeps changing.  I am skeptical that the land value differentials that streetcars create today will still be there a few decades from now, as buses continue to improve in a way that increases their resemblence to streetcars, but all that has been amply hashed out here.

Jacobsen is an effective writer, and as you can see from his seemingly dormant blog, he’s been thinking about this stuff for a while.  An earlier sketch of his for an Oakland streetcar network was my jumping-off point for my post “the problem with downtown shuttles,” which emphasised the need for very, very high frequency when serving very short trips.

While Jacobsen’s work is certainly an inspiring bargain, it certainly shouldn’t be compared too directly with what a consultant would do for the $300,000 pricetag that Chip Johnson cites.  That price would buy much more detailed design and operation plan, down to a level that would flush out any fatal flaw or cost-exploder.

The biggest fatal-flaw danger zone, to me, is that there will need to be a lot more thinking about how the streetcar will interact with several very major bus corridors that must use parts of the same street, including some that are meant to function as Bus Rapid Transit.  Jacobsen notes the issue but doesn’t delve, and it can be quite tricky.

This same segment of Broadway, for example, is already one of the problematic chokepoints on the proposed Telegraph/International BRT project.  Adding a streetcar to this chokepoint could make it worse.  Buses readily go around small obstructions that occur in their lane, but streetcars lack the maneuverability of buses.  A trapped streetcar can easily turn a small obstruction into a large one.  Ideally, the streetcar should become part of a package of transit improvements that collectively argues for an exclusive lane, streetcars and buses, through this sensitive section.

With all that said, bravo to Daniel Jacobsen for this tenacious and thorough work.  I wish I’d been this focused as an undergraduate!

Johannesburg: Gautrain Open in Time for World Cup
Is Speed Obsolete? … The rap-up, for now

You are here: Home › Oakland: A New Streetcar Proposal