Almost two months ago now, I did a post focused on startling claims, by Professor Patrick Condon of the University of British Columbia, that we should focus more of our transit investment on relatively slow services — for which his model is the Portland Streetcar — rather than faster ones, such as Vancouver’s SkyTrain driverless rapid transit system.  The resulting post is just the overture.  Discussion continued in the long, rich comment string.  There’ve also been some follow-up posts, and I’ve featured his response.

Professor Condon and I have had a number of constructive exchanges since I featured his views on the blog.  He will say quickly that he’s not a transport planner.  He is very concerned with sustainability metrics, but fundamentally he works in a design field where a crucial element of the task is to create compelling, motivating visions of a better place.  His attachment to the streetcar makes sense in these terms, especially in the context of his larger sustainability agenda, which is about reducing the need for long-distance urban travel generally.

Successful visions have to grab people in the gut. They have to be graspable in an instant by people who lack training, or even interest, in urban transportation. They have to be sharp and clear and not require a lot of explanation.  If you’re in the urban visioning business, and you want to make people excited about linear, walkable, dense neighborhoods, the easy and obvious way to do that is to visualise streetcars, because they work in those terms.  Streetcars offer an image that makes people feel good, quickly and viscerally. The urban design profession ultimately works for developers and politicians.  Those people make their huge bets by trusting their gut, not just by analysing costs, emissions, and travel times.

Speculation: When it comes to transportation especially, we all seem to be longing for some mixture of the future and the past.  Notice how many appealing technologies are either explicitly futuristic, like monorails and maglevs, or nostalgic, like San Francisco cable cars and historic streetcars. 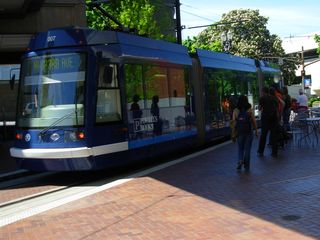 The streetcars used by Portland and Seattle (like Melbourne’s modern trams) are a two-for-one deal: they manage to feel futuristic and nostalgic at the same time.  As streetcars they appeal to a nostalgic narrative about restoring the urban Eden of circa 1900, while they also hint at the phallic/aerodynamic curves that signify speed, zoom, whoosh, sex, the future.  That’s a rich mix of emotions coming out of one vehicle.  If we judge vehicles as images, without caring about their efficiency or the mobility they can offer, then the Portland/Seattle streetcar — invoking all the authority of age and yet all the sexiness of modernity — is clearly a winner.

The problem with Condon’s vision (which the Antiplanner jumps on at once) is that transit planning is about competing with cars.  We can’t simply install the transit that matches our ideal city form, because we have to win a competition with cars as the city evolves.  This, I think, is one argument for why rapid transit, rather than slow services like streetcars, must be our top priority.  Rapid transit is transit that competes most effectively with cars, and that best complements other sustainable transport tools such as cycling and walking.  (After all, there’s little point in cycling to the Portland Streetcar, because the streetcar is much slower than cycling.)  Rapid transit works well as an essential mobility tool for great walkable and bikeable neighborhoods.  But understandably it doesn’t participate in creating an exciting motivating image of such places, because it’s usually underground, out of sight.  (If it’s elevated, of course, its urban design impacts are usually problematic.)

As I explained, this particular kind of proposal — to replace a bus in mixed traffic with a streetcar in mixed traffic — is unique in the world of transit corridor improvements in this respect: once you’ve spent all those millions, nobody can get anywhere any faster than they could before.  In other words, if you draw a map of where you can get to from your house in a fixed amount of time, spending these millions doesn’t change that map at all.

When you’ve got so many people without any kind of useful service, and so many voters who aren’t interested in urban visions but are interested in getting to work on time and then home to their loved ones, well, to some people, this is going to seem like an odd thing to spend millions of transportation dollars on.

(There would be no argument against spending urban improvement dollars — such as those that buy attractive light fixtures, public art, brick paving etc. — on a slow streetcar replacing a bus, because clearly it’s a magnificent amenity improvement.  My question has always been solely about how it’s sold as a transportation project.)

The architects of the Portland Streetcar were smart to propose a starter line that didn’t replace any existing bus services and therefore wouldn’t trigger this awkward speed comparison with them. You can, of course, compare the Portland Streetcar to the Line 15 bus between two points where they cross; you’ll find they have the same scheduled travel time, which works out to less than 7 mi/hr. But this comparison wasn’t in people’s faces because nobody had the experience of losing their bus service, sitting through streetcar construction, and then discovering that their transit mobility and access — how many places you can get to in a given time — hadn’t improved at all, and might even diminish.

Most of the Portand Streetcar’s imitators across North America seem to be making the same move. Most of the streetcar starter lines being proposed (most recently in Oakland) don’t replace an existing bus route; they do something else, something that buses aren’t doing now. It will be interesting to see if more cities move forward with proposals to replace busy bus lines with streetcars — as Minneapolis is considering — and how those proposals fare.

For now, I’m grateful to Professor Condon for stimulating this whole line of discussion, and to everyone who contributed excellent comments along the way.  This topic will come around again this summer in some presentations I’m developing, but for now I hope for a few weeks holiday from streetcar debates.  If this topic is your passion, the links in this post will lead you as deep as you want to go.  (I feel an oil-drilling metaphor coming on, so I’d better stop here!)

UPDATE:  Professor Condon has provided his own eloquent wrap-up in an eloquent comment below.

Oakland: A New Streetcar Proposal
Quote of the Week: Railways vs Democracy

70 Responses to Is Speed Obsolete? … The rap-up, for now

You are here: Home › Is Speed Obsolete? … The rap-up, for now