The Transport Politic proposes the need to consolidate more multi-modal planning authority at the level of the states.  While multi-modal planning authority is a good thing at any level of government, I wonder if US states are poorly suited for this purpose because so many US metro areas cross state boundaries. I notice this problem more from my current perch in Australia, because Australians even flirt with the idea of abolishing their state governments entirely.  While that’s certainly not the answer in the US, Americans do need to think about which level of government is best suited to which kind of task.

We consultants often joke that when bidding on a planning project, we need to multiply our proposed budget by the number of government agencies and departments involved.  An enormous part of government spending on planning — both staff and consultant time — goes into meetings whose purpose is to keep different bureaucracies apprised of what each other are doing, and moving along in parallel.  When it comes to projects that engage multiple state governments, you’re not just coordinating bureaucracies, you’re also coordinating legislatures and governors and state commissions of this and that, which have a hard enough time coordinating themselves.

Notice how California and Florida are out ahead of the pack on High Speed Rail?  Could this be, in part, because their projects are all in one state, because both states are fortunate to have their major urban areas well back from state borders? 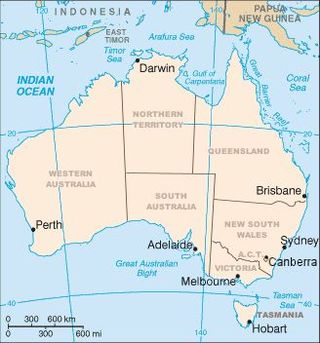 It’s interesting that the division of metro areas by state boundaries is so common in the US and not elsewhere.  Canada has only one metro area seriously divided between provinces — Ottawa-Gatineau — though obviously there is the international case of Detroit-Windsor.  Australia has only two fairly minor cases (around Brisbane and Canberra) because Australian states were all drawn in an awareness of what each state’s major city would be.  Look at Europe.  How many EU capitals are right on a border?  Just two: Copenhagen and Bratislava.  Despite its high level of urbanisation, the EU has remarkably few major cross-border urban areas, so almost all urban planning can happen rationally inside the EU states.

It’s interesting that despite such opposite histories, Europe and Australia ended up similar in this regard.  In both, states are organized around major capitals which are usually the largest city.  (In Europe, only Germany, Italy, and Switzerland — federations with multiple power centers — defy this pattern.)  European capitals naturally developed in defensible positions, which tended to be back from borders, and as those borders evolved the location of cities was a factor in drawing them.  Australia began with centralized colonial settlements that became the capitals, and the boundaries between those colonies — which later became states — were drawn so that in most cases, each capital is on the coast but otherwise more or less at the center of its colonial area.  In each case, the result was a geography of states that respects the geography of cities.

I think the Australian geography respects rural areas too, in that most rural area is in the same state as the big city and port that forms its most logical market.  (Of course, this pattern of economic relationships was further enforced by incompatible rail gauges in adjacent states — not, emphatically, something I recommend!).

By contrast, most US state boundaries were drawn before today’s urban geography emerged, and urban planning remains trapped and often frustrated by those boundaries.  Greater New York City must depend on decisions made in Albany, Trenton, and Hartford.  Greater Washington DC must look up to powers in Richmond and Annapolis.  This problem should have been predicted wherever rivers were used as state boundaries, because cities tend to develop on rivers.  How practical is it to expect the State of Missouri to lead effectively on urban multi-modal planning, when it will always be dealing with part of metro St. Louis and part of metro Kansas City?  This is not to say that these state governments are not doing their best; many of them are, but sometimes you inherit a political geography that makes the job almost impossible.

Sometimes, urban regions that cross state boundaries create regional transit agencies.  More commonly though, each state has its own agencies running services into whatever they perceive the central city to be, often missing out on many efficiencies that would be possible if those multi-state areas could be planned as one network.  In the New York CIty region, for example, ideas for combining the Long Island Rail Road with Metro North and New Jersey commuter lines, to create a cross-regional commuter rail network similar to the Paris RER, would be even harder jurisdictionally than they would be technically.

All this is high-level speculation.  (As a consultant, I have to emphasize that I’m not advocating the abolition of any of my potential clients!)  But it’s speculation that I wish more people were doing.

32 Responses to Can U.S. States Lead on Urban Planning?

You are here: Home › Can U.S. States Lead on Urban Planning?