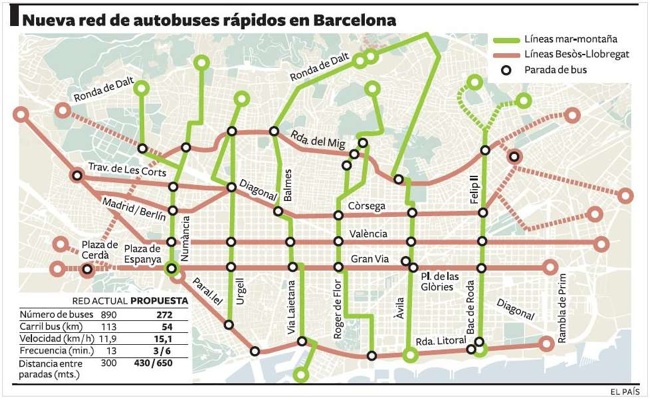 The new “rapid bus” network proposed for Barcelona looks a lot like the Los Angeles Metro Rapid:  No exclusive lanes, but strong signal priority, emphasis on fast implementation, and judging from the map, very wide stops.  I would resist calling this Bus Rapid Transit, though, unless you want the term to mean “any and all corridor-wide attempts to make buses a little faster.”

If the short green lines on this map run with just the few stops indicated, they’ll be very unusual in the transit world.  Usually lines need to be fairly long — like the great Los Angeles boulevards — to build up enough patronage to justify wide stop spacing.  So I suspect the map is in error on this point.

Speed ambitions are very mild: An increase only from 11.7 km/h to 15.1 km/h — still really slow.  Beyond that, you’d have to have an exclusive lane, which is hard to do on narrow streets, though Paris has certainly done it on some its wide boulevards.  The quantum jump in frequency will make a huge ridreship difference all by itself.  They’re going from 15 minutes to 3-6 minutes, a substantial increase in operating cost that’s certainly not paid for by the modest speed increase.

The new system is apparently the brainchild of UC Berkeley professor Carlos Daganzo (Full disclosure: I taught in his department in 2002, but we haven’t stayed in touch.)  From the Berkeley Transportation Letter:

The implementation would only require new operating protocols; minimal changes to the infrastructure and to the fleet of existing buses would be needed. Once glitches on these initial test lines are worked out, the rest of the system can be rolled out quickly. If work is begun within a few months, organizers believe they can have the entire system rolled out by the end of 2012.

They are looking at a concept developed by Volvo called a “moving cocoon,” in which lanes can be cleared for buses only when a bus is approaching, but used by cars at other times.

“Basically, this method treats buses as if they were ambulances,” Daganzo says, adding that this element of the plan gives buses the right of way, while keeping the bus company and the city from being at odds over limiting the use of a traffic lane—a conflict that has slowed BRT progress in other cities.

However, if the thing really does run with 3 minute headways, as advertised, there’ll be bus on every signal cycle or at least every second one, so I’m not sure how this will be different from an exclusive bus lane.  And you can be sure that a bus every 3 minutes, in such a dense city, will carry far more people than a lane of cars.

On the US Downtown Bus Plaza
Can U.S. States Lead on Urban Planning?

You are here: Home › Barcelona: “Treat Buses Like Ambulances”