Lately, Conor Friedersdorf of the Atlantic has been riding the bus.  We’re seeing more good press for buses lately, as more national commentators focus on urban mobility problems.  Friedersdorf’s figuring out most of what I’ve long advocated …

But it’s interesting that this struck him as new:

Were I a city planner trying to improve bus service, I’d try to design or exploit a public square where a lot of buses could meet and people could transfer between lines, and invest heavily in that area as a permanent transportation hub.
It would have dedicated bus lanes going into it and out of it, vendors would be invited to sell goods there in an open air market, coffee shops and bars would be encouraged, food trucks would be permitted to park there, a corner would be dedicated to a skate park, a small police substation would sit at another corner — basically I’d try to have an area where there were always a bunch of people around, a bunch of different stuff to do, pleasant places to sit, lots of places within walking distance, etc.

And the investment, the permanence it implied, would go some ways toward stoking the kind of development that subway stops bring. In fact, a city like Los Angeles where more subway stops are likely in the future would do well to build a future subway stop location as a bus hub now pending future development.

Such places have been tried in America, perhaps not with all these features but certainly some of them.  The most successful has been the Portland transit mall, along 5th and 6th Avenues through the center of the city, which was bus-only from its inception in 1978 until light rail was added to it in 2009.  This is how it looked in the pre-rail state. 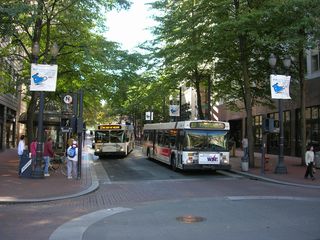 The mall featured many of the urban features that Friedesdorf mentions, though of course they varied along the length of the street according to the nature of the surrounding district.  The midpoint of the mall, where it intersected light rail, was the site of the Pioneer Courthouse and Pioneer Courthouse Square. 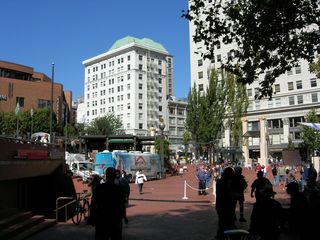 The Pioneer Courthouse Square is often called “Portland’s living room,” the absolute center of downtown Portland.  So here is Friedersdorf’s central square, while the mall constitutes the “bus lanes going into and out of it.”

It’s interesting that one of the desired outcomes Friedesdorf mentions is “permanence,” because this calls to mind the permanence that rail advocates insist comes only from rails in the street.  The creation of the Portland Mall, especially in the political context of the 1970s, was a massive statement about the city’s commitment to transit, and included a range of high-cost features designed to make clear that this commitment was there to stay.

One telling moment in its history was when the Hilton, which faced the 6th Avenue side of the mall, did a remodel in which they could have moved their main entrance to the other side of their building, where it would have faced a car-oriented street, Broadway.  They chose not to, even though the mall gave them only one car lane on a street otherwise devoted to buses.  The bus mall was a better front door address.  (The flagship store of Nike was once right across the street.) 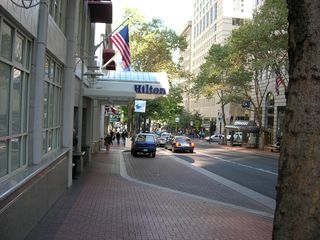 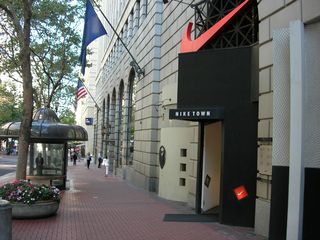 The high-end central bus plaza has been tried at various scales in other American cities.  The success or failure of these has depended a lot on how the city views public transit in general, and how well the plaza relates to whatever else is going on.  The Spokane Plaza in Spokane, Washington, for example, is a fully enclosed block with bus stops around it.  The interior of the block is not just a heated place where you can watch monitors to see when your bus arrives, but also contains commercial spaces, with skybridge connections into adjacent retail and office buildings.  This sequence of photos takes you from outside into the ground floor and then up to the skybridge level.  (My photos are from 2005; Spokane readers are welcome to send more recent ones.) 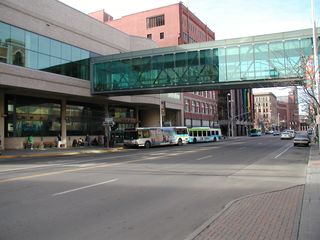 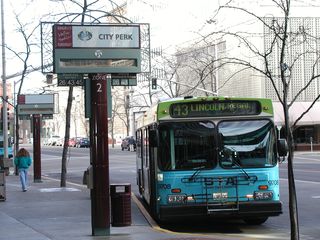 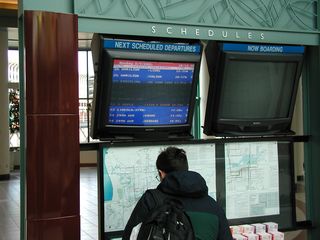 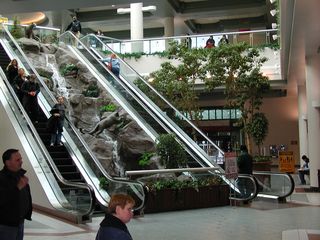 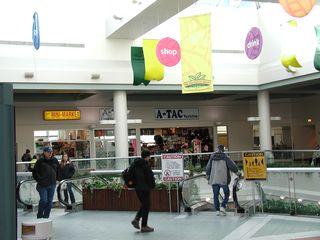 Spokane’s plaza is unusual for its very central location in downtown. There are similar but less elaborate facilities in Las Vegas, Denver, and Boulder, among other cities.  Often, though, these central stations are slightly removed from the center of downtown, hence cut off from its commercial energy, and hence not really credible as centroids of urban life.  Bus operators are always tempted to advocate a facility that’s optimised for bus circulation and storage, and this always conflicts with what you can accommodate in a place that feels like the center of the city.  So often you get outcomes as in Boulder, a bus station under a parking garage on the edge of downtown. 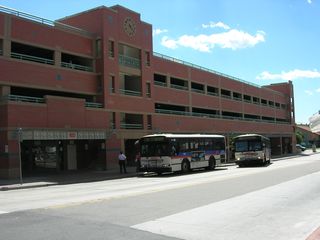 The result is a functional station, and often these are the least-bad sites given a city’s geography and politics.  But of course, transit should ideally bring you deeper into downtown than you can get with your car, whereas a bus station in a parking garage implies that transit and cars deserve exactly the same degree of proximity.

The development of downtown bus stations — especially in cities that do not yet have rail — can be a critical test of a city’s commitment to transit.  Spending a lot of money on infrastructure, bus or rail, locks the service into place in a way that is hard to dislodge.  The centrality of Spokane Plaza has been controversial in Spokane; there have been many business-driven proposals to move the buses to a less central location.  But it has survived, partly because the magnitude of the built investment — that celebrated “permanence” — made it difficult to move.

Ultimately, the creation of activity hubs around transit — even buses — relies on the city’s eagerness to encourage whatever level of commerce the market will bear, in addition to making the pedestrian connections to other commercial activity as strong as possible.  It may start with pushcarts, and then grows into permanent retail opportunities.  This may correspond to a growth from bus facilities into bus+rail facilities, but there’s no necessary correlation between the level of commercial activity and the type of wheels that the transit runs on.  Commerce will always be attracted to where people gather, so if people are gathering anyway for a transit connection point, commerce can help turn that point into a place.

9 Responses to On the US Downtown Bus Plaza

You are here: Home › On the US Downtown Bus Plaza