When he heard I’d be visiting Paris, Yonah Freemark told me not to miss the remodeling of Metro Line 1, the busiest subway line in Europe.  Its daily ridership is 725,000 — around that of the entire San Francisco Muni network (all modes).  It’s not surprising, when you look at where it goes.  (For those of who you need to know where north is, it’s down in this image, which I always find irritating.)

When I lived in Paris in 1986 I was on this line constantly, and if you’ve been there as a tourist you’ve probably ridden it too.  It connects huge dots for both tourists and locals, including the massive La Défense employment precinct, the Arc de Triomphe, the Champs Elysées, the Louvre, Les Halles, and the Marais.  RER Line A also connects many of these dots, with faster service and a slightly higher fare, but Line 1 remains packed.  In the old days, this line ran with MP 59 trains, which were functional but not air conditioned and quite unpleasant when packed.  (Paris was in the 80s F [low 30s C] throughout my most recent stay, and I found myself choosing transport modes based partly on air conditioning.)

The Paris transit agency, RATP, is now remodelling the line to convert it to driverless operation, following on the successful opening of its first new driverless metro line, Line 14.  Somewhat in parallel, the line has been a high priority for conversion to Alstom MP 89 cars — which can be either driverless or not — and I rode a few of these.

They are no longer a train of multiple cars at all.  Instead, like Paris’s new trams, they are a continuous space with articulated joints.  This has considerable safety value: it means you could evacuate the entire train through any door if you had to.  There’s also less fear of being trapped or cornered in a crime situation.  There’s more light, and even on a line that’s mostly underground, people seem to appreciate large windows.

They also clearly have a larger capacity, because the space is more flexible and all the space taken up by joints between cars can now be put to use.  (It’s not dangerous to stand in the articulated joint of one of these trains, any more than it is on an articulated bus, so long as you don’t mind seeing walls stretching and compressing around you.)

Eventually, the line will feature automated doors on the platform, allowing the platforms to be air conditioned and also eliminating the risk of people falling or jumping in front of trains.  It’s an impressive remodeling.  Paris sensibly tried all this first on a new line, Line 14, but once it worked they had the courage to remodel their busiest single line — where the risks were highest, but also the rewards.

Finally, a fun fact:  Did you know that the world’s busiest subway line actually runs on tires, not steel wheels?  Tires on rails, admittedly, but tires nonetheless. 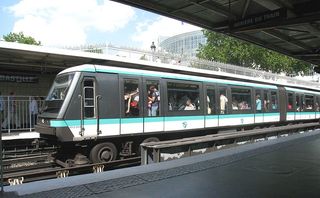 If you look closely, you can see that small steel wheels, placed horizontally, stabilise the vehicle against the side rails.  But the weight of the train is on the tires!

The Complete Interview with Vancouver’s Buzzer
Ridership Down in the US? Look Deeper

You are here: Home › Paris: The New Old Métro Line 1