It seems to be, and I’m sure the New Republic’s Robert Puentes is right about the causes — (1) recession-driven unemployment (which both reduces commute demand and reduces discretionary income) plus (2) the epidemic of service cuts, which is proving yet again that not many riders are so “captive” that you can’t drive them away eventually.  Both of those factors are well-observed correlations.

But it’s interesting that the New Republic chose to feature this map from the Brookings Institution’s interactive source, which shows total numbers of public transit commuters by metro area, as opposed to this one, which shows the percentage of all commutes that go by public transit, or what’s technically called the Journey-to-Work (JTW) mode share.

A map of net numbers of transit commuters is, of course, mostly a map of how big cities are, which is just not very interesting. 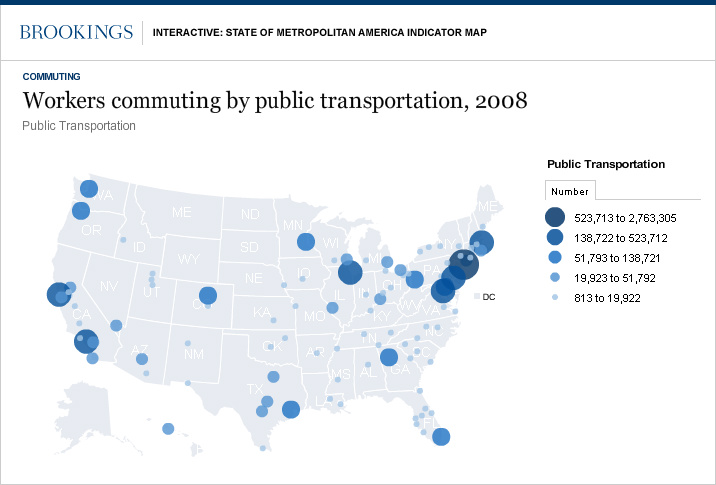 But if you look closely at the map of mode shares (which I can link to but can’t seem to copy) you see a map of how dense big cities are.  Toggle the two, and as you go from raw commute numbers (the map above) to mode shares, you see the metro areas of Los Angeles, Houston, Atlanta, and Miami all shrink, which means that those areas have low public transit use compared to their big populations.  What doesn’t change is the high score of the big, denser metros: the Northeast Corridor, Chicago, Seattle, and the San Francisco Bay Area.  Of course, those metros all have lots of sprawl, but their transit numbers are driven by very, very high ridership in their dense core cities, plus the heavy commute market into those cores due to the difficulty of driving and parking there.

All of which points to a couple of typical warnings about US transit statistics:

Back to the Brookings maps, it’s also worth noting that as you toggle, a lot of interesting smaller cities jump out — cities with high rates of transit use for their relatively small populations:  Salt Lake City, Albuquerque, Tucson, Honolulu, New Orleans, Madison, and many others.  A mixed bag, but why those cities?

These cities may remind you of the factors regarding low-car cities, where the dominant forces seemed to be city age, poverty, and dominant universities.  But when it comes to high mode-share small cities, the factors are a little different.

Poverty doesn’t seem to matter at much on this score.  Poverty keeps people from owning cars but poor people also have shorter commutes, if they are fortunate enough to commute at all.  Poverty is generally aligned with low skills, which aligns with jobs that are standardized and interchangeable (e.g. McDonalds) as opposed to specialized (e.g. bioengineering).  The one great thing about a standardized and interchangeable job is that if you can find it anywhere, you can probably find it close to home.  Long-distance commutes are more of a problem for educated workers, whose jobs are more specific and thus harder to find.

But dominant universities, I’m willing to bet, matter a lot.  You may not think of Tucson as an especially transit-oriented place, and if you’re not associated with the University of Arizona there, then it probably isn’t for you.  But a massive university is the best transit demand engine a city can have: huge masses of temporarily poor people, often with strong environmentalist values, who come and go at the campus all day, not just in expensive-to-serve peak commute periods.

The second best market after a university is government employment, as governments are more motivated to help employees make good commute choices than private employers are.  So state capitals (Salt Lake, Honolulu, Madison) may surge a bit on that score.

Density, though, always matters, even in relatively small but mostly compact cities like Honolulu.

Transit infrastructure investment matters too, but overall quantity and quality of service may matter more than the presence or absence of rail transit, for example.  Rail-heavy Salt Lake City doesn’t stand out in comparison to similar but rail-less Tucson, for example.  That’s not an argument against light rail.  Salt Lake’s light rail line to the University of Utah, for example, is a great way of handling the huge capacity demands there.  But it’s a warning that big transit infrastructure still responds to demand rather than creating it, especially in the short-term scale of the Brookings analysis.

Paris: The New Old Métro Line 1
strasbourg: you can’t take it home with you

19 Responses to Ridership Down in the US? Look Deeper

You are here: Home › Ridership Down in the US? Look Deeper