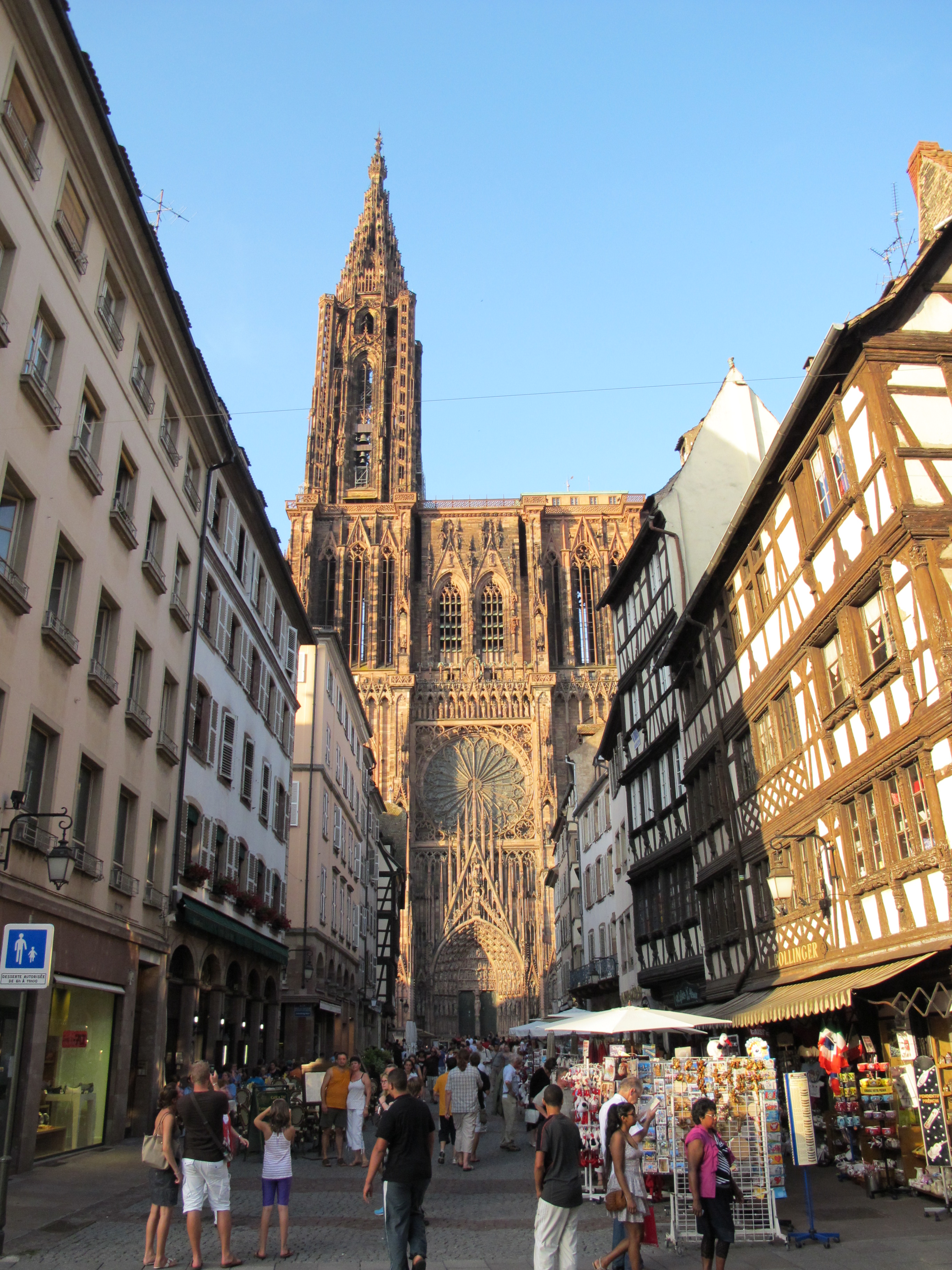 When any experienced streetcar/tram advocate starts talking about the magnificence of trams as a placemaking tool, sooner or later you'll hear about Strasbourg, capital of the Alsace region of France, right on the German border.

(Strasbourg has several claims to fame, apart from a substantially intact old city with layers extending back to the Renaissance.  As a traveler in Europe, I'm long past the cathedral-worshipping stage, but Strasbourg has the most astounding cathedral in Europe — a composition that seems built of vertical shafts of light as much as of stone.  It was the world's tallest building for over 200 years, and its mass displays an utter lack of proportion to the surrounding city that, if built 600 years later, would have been
called Brutalist.

Strasbourg is also the seat of the European Parliament and Council of Europe, which make second only to Brussels in its importance to the EU.  But this is a transit blog …)

Strasbourg was the first city to use the low-floor articulated tram design, a continuous space with hinged sections instead of multiple cars. 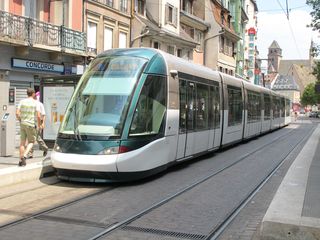 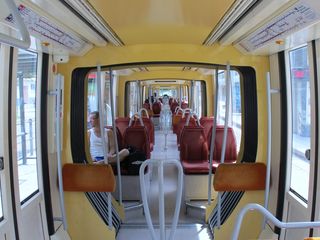 Similar trams can now be seen in many other cities, including the circumferential trams of Paris.  Crucially, the whole Strasbourg tram network is new, designed for these trams rather than adapted from older high-floor styles.  The first line tram line opened in 1994, and much has been built in the last few years.

French Wikipedia amusingly describes the trams' design as futuriste — "futuristic."  In both languages, this term, when applied to transit vehicles, basically means "phallic/aerodynamic," i.e. "featuring rounded ends that are supposed to recall both airplanes and penises."  Needless to say, the aerodynamic needs that mandate this shape for airplanes and high-speed trains are largely irrelevant to a vehicle that spends most of its time under 50 km/hr.

If you're a regular HT reader or European traveler, you've seen trams
like the one above.  This one's an Alstom Citadis, but Bombardier makes
them too, and they're the current best standard, prominent in Bern and
Paris among other cities.  The crucial idea is the continuous space,
with articulated sections rather than distinct cars.  Vast windows and low floors help the tram's inner space feel like a continuation of the street.  Thanks to these windows, too, the trams are translucent from the outside; it's easy to see right through them, and their opaque parts are mostly at the base, so they feel less like the "walls" that massed transit vehicles can form in the streetscape.  (The newest European buses also have this feature.)  The only distinction between Strasbourg's standard tram and those
I've seen elsewhere is the length of the tapered segment at the ends,
which creates that insdispensable phallic/aerodynamic look.

Strasbourg seems, at first, to marry the ideals of rapid transit with the ideals of the urbanist pedestrian quarter.  Through the old center, the tram glides firmly through pedestrian precincts, ringing bells as needed. 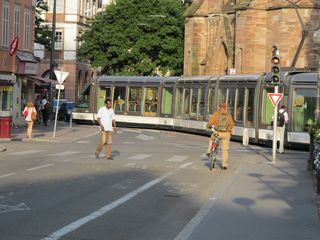 Once out of the centre, it slides into exclusive grass-track medians on major boulevards. Outermost segments get up some speed, but average customer travel speeds
are relatively low because the fastest segments are at outer ends where
the fewest people are riding.

Oddly, no effort has gone into making the streetside infrastructure as futuriste as the trams.  Stations are a pretty standard high-end European shelter, nothing special but functional.  Ticket machines are so frequently out of order that even my Lonely Planet guide in French mentioned this as an issue. 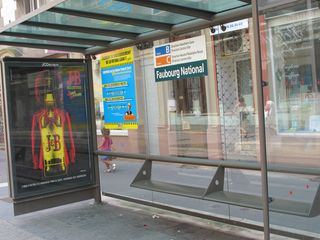 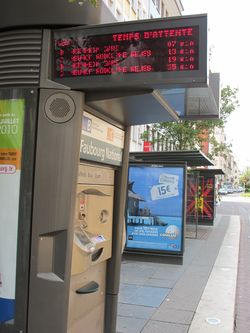 But these small faults only underscore, by contrast, how well the trams work, both as transport and as elements of the streetscape. 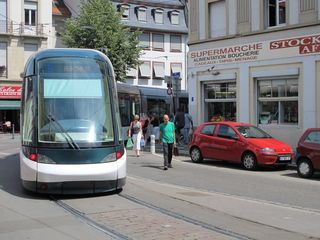 The risk to Strasbourg visitors, of course, is that they'll want to buy the whole thing and take it home, as politicians are prone to do when visiting streetcar cities.  At the conference I attended in Amsterdam last month, Wijnand Veeneman of the Technical University of Delft mentioned Strasbourg in particular as an example of this problem of tourist shopping in urban public transport.  Even within Europe, there's a tendency for people to visit Strasbourg and say: "That's exactly what I want at home!"  And of course, for the right price, Alstom or Bombardier will sell you trams just like these.

But the apparent success of Strasbourg's trams is really more about Strasbourg than it is about trams.  Most of the achievement depended on (a) distinctive features of Strasbourg's urban form and (b) many other changes to the city's transport system that happened together with the introduction of trams.

Urban form first.  Strasbourg's size is such that most transit trips are manageable distances.  People aren't commuting 40km or more, as many do in Paris.  So trams, operating on the surface, and slowing down to penetrate the old urban core, could deliver reasonable travel times, so long as they did not mix with traffic.  For readers in North America and Australia, it's important to be clear that these are what you would call light rail, rather than what North Americans call streetcars and Australians call trams.  They are in exclusive right of way, interacting with signals but not with car traffic in their lane, and they serve fairly widely spaced stations — every 300m or more even when going through the central pedestrian zone, wider still as you get further out.

It's also important that Strasbourg's streets are fairly wide, even in the old city.  There's nothing like the tight squeeze of Amsterdam's Leidsestraat, for example, where oncoming trams are forced to share single track to preserve pedestrian space.  Elsewhere, even in 18th Century areas, Strasbourg is a city of wide streets and often boulevards.  These have enough space here for exclusive lanes, usually grass track, for the trams.

Other French cities of Strasbourg's size have built small underground metros, but Strasbourg has chosen to develop its trams as its top-level urban transit service.  The decision allowed the money to cover a larger area — Strasbourg's trams are much more extensive than the Lille and Rennes metros, for example.  But this same decision raised the stakes for the trams as a transit service.  It put pressure on the leaders and planners to define a high standard of speed and reliability and refuse to compromise it during the inevitable block-by-block debates about the tram's urban and traffic impact.  Again, the tram does go through pedestrian streets, at an appropriately low speed, but it moves assertively through these areas, bells warning pedestrians to get out of the way, and once it's out of the core and running in boulevard medians, it's as fast as any similar light rail anywhere.

As for the concurrent changes to Strasbourg's traffic system, they were massive.  Most of the main pedestrian streets that the tram follows through the old city were pedestrianised only as the tram was introduced.  Cars were banned from large areas, apart from off-peak deliveries.  Parking in the core was reduced, mostly shifted to satellite locations from which people could take the tram into the core.

Introducing streetcars sounds easy, but once you explain the whole package to the visiting civic leader, they begin to grasp how hard this must have been politically.  Strasbourg looks beautiful and serene, but in political terms you could also see it as a battlefield memorial, recording a triumph that involved major pain and suffering.  Transit tourists should learn to watch for both elements when they visit an admired city: Not just the achievement, but also the lingering evidence of the struggle and sacrifice that it entailed.

Sure, Alstom will sell you streetcars just like these.  But that won't turn your city into Strasbourg.

Ridership Down in the US? Look Deeper
Quote of the Week: Taking Bus Lanes Seriously

20 Responses to strasbourg: you can’t take it home with you

You are here: Home › strasbourg: you can’t take it home with you