Posted on October 2, 2010 in Density, Philosophy

When commentators argue about the importance of density to public transit, it’s common to hear a range of density figures thrown around.  These figures are almost always averages over a large area, and as I argued on my recent post on the perils of average density, averages are simply useless for describing the kind of density that determines public transit outcomes.

As Paul Mees’s new book shows, you can easily run numbers that show that metro Los Angeles is denser than metro New York. If you want to sow confusion, you’ll use those numbers to imply that since Los Angeles has far lower transit ridership than New York, density must not matter to transit after all.  In fact, density matters, but average density doesn’t.  What matters to public transit is the density right around its stations and stops, and this can be quite unrelated to the average density of a whole urban area.

The post is still worth a look for its excellent comment thread.  Several commenters proposed alternative ways of talking about urban density that would better describe the way density matters to transit.  They all seem to have the same theme:

The conventional idea of density is about comparing units of area to each other: this patch of land is denser than that.  Instead, compare the densities of units of population.

There seem to be two ways of asking a population-centered density question:

On the blog We Alone on Earth, Fedor Manin took a shot at the question “what percentage of the population lives at each density?”  Here are his graphs: 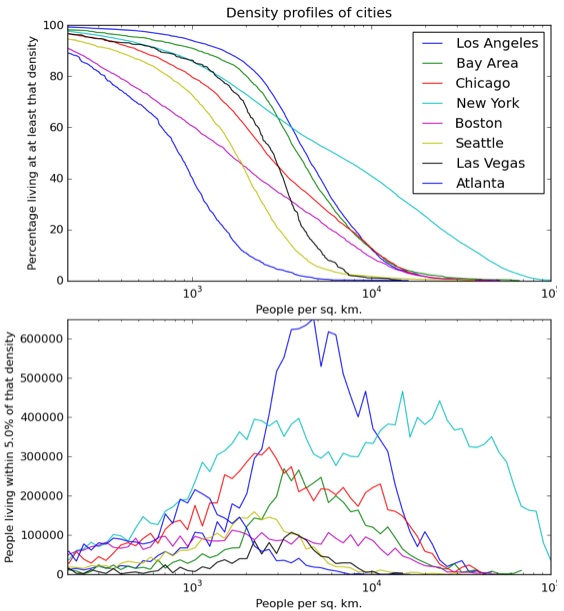 The second graph is a distribution of the population by density, showing what percentage of the population is in each density range.  Unlike the average densities of metro Los Angeles and metro New York, which I discussed in my last post, these graphs get closer to what matters for transit.  In New York, (the pale blue line) you have a lot of people living at very high density — inevitably right next to a subway station — and these are what drive the city’s high transit needs and performance.  In Los Angeles (the dark blue line that peaks in the center of the graph) you have an overwhelming predominance of a moderate density figure.  That moderate density corresponds to development forms ranging from the townhouse to the four-story apartment building, but this form requires long travel distances and more spread-out access needs than New York does, so it yields much lower transit performance.

Notice how this graph corrects common stereotypes of Los Angeles, stereotypes that you might find reinforced by Google Earth.  A lot of the area of metro Los Angeles is large detached homes with swimming pools, a very low density.  So if you’re thinking in terms of area — as anyone looking at a map must implicitly do — that development pattern seems to dominate the city. 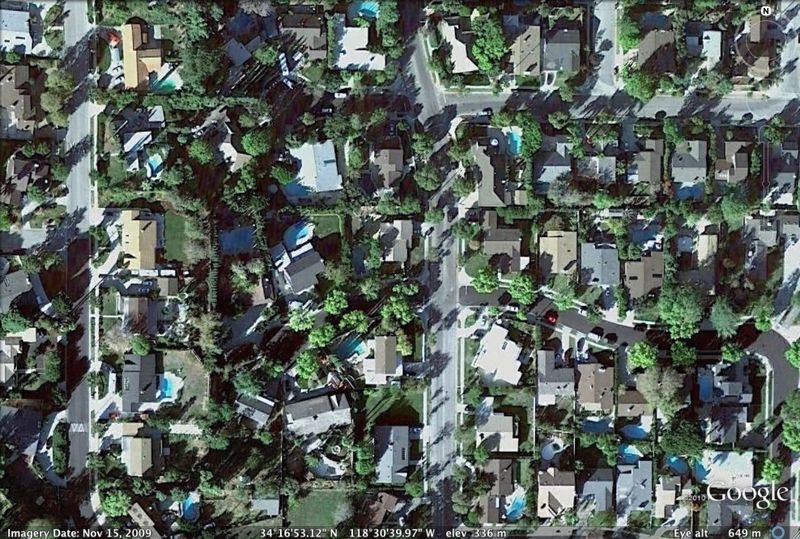 Yes, but although those stereotypical homes cover a lot of area, they don’t represent all that many people!  That, after all, is what low density means!  So if you look what percentage of the population of Los Angeles that lives in these low-denstity homes, it’s not much.

Now here’s the point that’s easiest to miss:   All that area covered by relatively few people is not really a problem for transit, so long as we don’t give it more service than its relatively small population (and low ridership potential) deserves.  Transit outcomes don’t really depend on how much of this low density stuff there is in a city.  They depend on how much high density stuff there is, and the average density of the whole city will tell you nothing about that.

Fedor Manin’s distributions of population by density, charted above, still don’t get us exactly to a citywide assessment of “density as it matters to transit,” but they are much, much closer than any citywide average density.  On the other hand, a distribution can’t be reduced to a single quotable number, and in many conversations, if you don’t have a single quotable number, you don’t get a word in.

So the answer, as several commenters have suggested, is probably to talk about the average density per person rather than per unit of area.  It may seem that density is intrinsically a “per unit of area” concept, but you can certainly ask:  “At what residential density does each citizen live?”  Here, residential density is ideally the density of a single parcel: one house or apartment building.  What percentage of the population lives on detached homes on quarter-acre blocks?  What percentage lives in buildings taller than five stories?

This is probably still too much averaging, and likely to mislead, but at least it takes out a lot of the noise that contaminates citywide averages, and focuses on fine-grained parcel-level patterns that are more likely to reflect proximity to transit.  Readers are encouraged to play with this idea!

The Resonance of City Names: What is “San Francisco?”
On Bus Lanes, Britain Can Learn from Los Angeles

29 Responses to Can We Make Density Make Sense?

You are here: Home › Can We Make Density Make Sense?