The bus lane on the M4 motorway into London is under attack by the new Conservative/LDP government.  Some HT readers wonder if this is a fatal flaw of all forms of BRT that rely on highway bus lanes.  The BBC tells the story:

[The M4 lane] lets buses, coaches, licensed black taxis and motorcycles speed towards London, while the rest of the motorway’s vehicles often ended up crawling, especially at peak times. However, 11 years later it has been revealed that Transport Secretary Philip Hammond will announce on Monday that the bus lane is to be scrapped….

The [Automobile Association]’s Andrew Howard says: “We are very pleased to see this development, as we have campaigned against the bus lane from the very beginning. “It is always aggravating to sit in a traffic jam beside a bus lane that has nothing in it, and that is the situation on the M4.” The RAC Foundation was equally pleased, saying that scrapping the bus lane was a good idea because it was “so underused”. RAC Foundation director Stephen Glaister adds: “Most drivers on the M4 will wonder why this decision has taken so long.”… 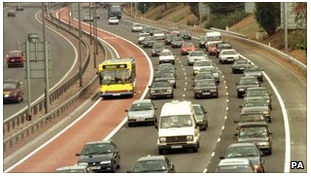 But if the BBC’s photo is any indication, the bus lane is working just right.  Even the one bus in the image is clearly carrying more people than an entire lane of traffic in the image, so it’s well worth the space it’s taking.  Yes, a properly functioning bus lane looks empty most of the time if you’re sitting right next to it in a stopped car.  The BBC goes on:

Despite the political row, the AA’s Andrew Howard admits that the removal of the bus lane may not ultimately change much. He explains: “When the bus lane ends, the M4 then reduces to two lanes for an elevated section. “So you are still going to see big queues going into London – getting rid of the bus lane will simply move them 3.5 miles to the east.”

As one HT reader laments:

Bus/HOV lanes embody an inherent dilemma. If they are functioning properly, they appear empty or unused compared to the congested general purpose lanes, even if they are carrying far more people/hour, and may even be aiding SOV [single-occupant vehicle] traffic.

It is too easy for populist politicians to appeal to motorists by opening bus/HOV [high occupant vehicle] lanes to SOV traffic, and that is apparently what is happening in London.

Yes, indeed.  I hate to say it, but the Brits need to put their well-honed fascination with Los Angeles to work, because the El Monte Transitway on Interstate 10 was the site of a similar mistake in 2000.  There, too, buses and carpools seemed to fly past stopped traffic, so that drivers of the stopped cars had lots of time to gaze at the asphalt of the bus-carpool lane, contemplating how empty it looked.  There, too, it was tempting for a naive politican to try to score some votes by appealing to these disgruntled single motorists.  Wikipedia:

In 1999, then state senator Hilda Solis authored a bill, Senate Bill 63, to drop the carpool definition from three occupants to two, which passed both the state Assembly and Senate and was signed by Governor Gray Davis on July 12, 1999. The bill was opposed by both Caltrans and Foothill Transit, as well as the Southern California Transit Advocates, a transit users’ organization. It received support from many cities hoping that carpool rates would increase. SB 63 went into effect on January 1, 2000. As a compromise, the bill was designated an experiment which would sunset in 24 months.

In fact, the actual number of people moved on the busway dropped, meaning that the lowered requirements did not attract new carpoolers. Instead, many carpoolers previously forced to triple up moved to two-person carpools, which increased the vehicle volume on the roadway and consequently resulted in severe congestion. As a result of the congestion, many individuals abandoned carpooling and decided to drive alone. Speeds on the busway dropped markedly from 65 mph (105 km/h) before the experiment to 20 mph (32 km/h) during the experiment, where speeds in the regular lanes did not change significantly (as a result of 2 person carpoolers moving to the busway), and actually dropped from 25 mph (40 km/h) to 23 mph (37 km/h), paradoxically making the busway slower than the regular lanes. Accident rates on the busway increased significantly from zero in the six months before the experiment to five during the experiment. Travel times along the busway increased by 20–30 minutes in each direction, generating over 1,000 complaints to government agencies, and requiring Foothill Transit to hire more drivers and stage more buses to provide busway service.

As a result of public outrage, Assembly Bill 769 was passed in July 2000 that was an emergency measure to terminate the experiment during peak hours. … Hilda Solis … did vote for AB 769, effectively admitting that her idea was a failure.

Yes, from behind the wheel of your stopped single-occupant car, a well-functioning bus lane looks empty most of the time.  But at high-demand times, bus lanes easily move far more people than traffic lanes.  The question is: do all the users of the road matter equally?  If so, it should be a no-brainer to provide faster travel times to people who use limited capacity more efficiently.  That’s what bus (and HOV) lanes do.

Can We Make Density Make Sense?
Montréal: More on the New Frequent Network

19 Responses to On Bus Lanes, Britain Can Learn from Los Angeles

You are here: Home › On Bus Lanes, Britain Can Learn from Los Angeles