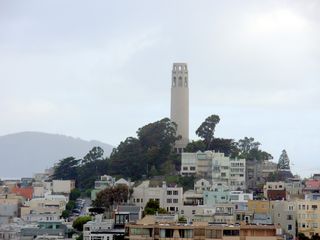 In a fine think-piece on “golden ages” of urban creativity, Aaron Renn of the Urbanophile mentions San Francisco as a place that isn’t having one:

If you want to enjoy the best a contemporary American city can offer, then San Francisco is your place. I’ll admit, it’s my favorite city in the US. But I don’t imagine that if I moved there (as opposed to Silicon Valley) that I’d get to witness any great historical happenings, or play any role in defining even that city’s urban future, much less creating America’s next great metropolis.

What does it mean to say that San Francisco “(as opposed to Silicon Valley)” is not likely to be a site of “great historical happenings”?  I don’t want to argue the truth of this statement, because I’m not sure of it’s meaning. What exactly do you mean by “San Francisco”?

In my recent post on the perils of average density, I noted how multiple meanings of a city name can undermine the apparent objectivity of facts.  If the Mayor of Toronto says “Toronto” he probably means the City of Toronto, but when Toronto’s airport authority uses the same word they clearly mean the “Toronto” that they serve, namely the entire urban area.

This is a fairly simple ambiguity, common to most big cities.  But California is much trickier, and the Bay Area is trickiest of all.  The name “San Francisco” is hard to apply to the entire Bay Area, because (a) the city is small compared to the region and (b) the city’s isolated peninsular position within the region means that it is at some distance from the cities around it, so “San Francisco-ness” can’t just flow across the city limits and into the surrounding suburbs, as “Toronto-ness” and “Chicago-ness” so easily do.

Yet if you say that “San Francisco” is strictly the small and distinctive City of San Francisco, you have deprived the name of much of its possible resonance.  This tightly bounded San Francisco is still a wonderful city, but it won’t bear comparison to “Chicago” or “Los Angeles,” because those names unfurl over large and amorphous space, both vertical and horizontal, without hard boundaries, and this unfurling is what gives these names their power, or more literally, their resonance.

Great city names are powerful, exciting, and motivating because they resonate: they set off an echo between different meanings of the name, especially the larger and smaller areas that it can connote.  The emotive power of the word “Chicago” lies in the way it can mean the entire metroplex, or the city of Chicago, or just the dramatic high rise skyline of the Loop.  Indeed, what is a downtown skyline but a symbol of the entire city, a symbolism that’s only possible because the skyline and the entire urban region can both be called  “Chicago”?  The relationship between the downtown skyline and the whole city is a resonance between these two possible meanings of the name.  Resonance conveys an impression of power and depth.

San Francisco is denied this kind of resonance because it’s so hard to identify the city’s name with a larger metro area.  Nobody within 100 miles would try to.  Instead, locals refer to the Bay Area, a term that warns us not to expect a central symbolic city, since water bodies are naturally settled around their edges and not in the center.

So if you’re going to talk about San Francisco “as opposed to” Silicon Valley or Berkeley or Skywalker Ranch any of the other centres of innovation nearby, you’re slipping on a language problem arising from the local geography — a pattern of settlement that prevents us from thinking of those nearby places as part of a greater, resonant, globally recognized “San Francisco.”  If you do this, you’re missing a lot of information about how the whole Bay Area operates as a place, a culture, an engine of innovation.

You could also say that if you use “San Francisco” to refer only to the fairly small legal city, you’re applying a tourist’s reduction, like the one we routinely apply to Venice.  You’re imagining a charming, historic, museum-like city conceived in isolation from its economic web.  Yes, once you define a city that way, it’s easy to tell yourself that the next great urban revolution won’t happen there.

In reality, San Francisco’s qualities are intrinsic to the success of Silicon Valley, Berkeley, and all the other centres of excellence nearby.  Why do so many of the leading creative tech firms run huge fleets of commuter buses from San Francisco to their suburban campuses?  Because they need to attract the smartest and most creative young employees, and many of these people insist on living in San Francisco!

It’s easy to imagine that you’re being generous when you lay out a manicured corporate campus with jogging trails and libraries and meditative wetlands where nobody will ever see a homeless person, but in fact, many of your most valuable employees would rather be stepping over homeless people to get to their urban lofts, and have more brilliant ideas amid live jazz in a seedy club than they do in the most well-designed campus offices.  That means, too, that a lot of Google’s great thinking actually happens inside San Francisco, feeding off of all that it offers, and further blurring the lines between the city and its surrounds.

Of course, I don’t buy the assumption that even if San Francisco were an island it would be bereft of creativity.  But fortunately, San Francisco is not an island, and even if the name “San Francisco” can’t unfurl over the whole Bay Area, the whole region still relies on San Francisco and can’t be separated from it, which is a very good thing.

38 Responses to The Resonance of City Names: What is “San Francisco?”

You are here: Home › The Resonance of City Names: What is “San Francisco?”