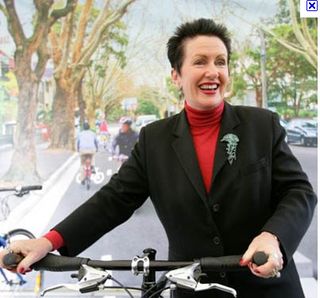 The City of Sydney just released its Draft Car Sharing Policy (Item 4 here).  The Murdoch-owned Daily Telegraph has a respectful story here, although the print edition of the same story carried a more lurid headline, “Clover’s car wars speed up.”

“Clover” is Sydney Lord Mayor Clover Moore, who has made the City a national leader in sustainable transport policy despite the relatively weak role of local governments in the Australian political system.

It’s important to note that the City of Sydney is small — only 177,000 of greater Sydney’s 4.5 million people, consisting of the CBD and innermost, densest neighborhoods.  Even there, public transit isn’t all it needs to be, with frequencies as poor as 30 minutes (and no evening service) for trips between inner city activity centres other than the CBD.

With that in mind, the statistics are looking good.

The growth of car sharing in the City’s area has been extremely rapid. Since 2007, the City has installed more than 190 dedicated car share spaces, catering for approximately 4,000 City residents and 500 City-based businesses. Membership is growing by some 180 residents a month.

It is estimated that the car sharing program has taken at least 550 cars off City streets and reduced on-street parking demand by at least 250 spaces compared to business as usual.

And unlike many governments, the City of Sydney is explicit that rising car ownership is a problem for a city with finite space:

The City of Sydney has the lowest rate of household car ownership in Metropolitan Sydney, at just 0.72 cars per household (in 2006). In many City neighbourhoods, however, household car ownership levels are rising quickly, with serious implications for parking availability, traffic congestion and resource consumption. Increased car sharing can slow growth in household vehicle holdings.

The goal is to raise carshare membership from the current 4000 (out of 90,000 households) to 9000 or 10% of all households.  They estimate that this can be achieved with a car share fleet that would be 1% of the total fleet registered in the city.  In other words, there’s the potential to replace the ten cars now owned by ten households with a single shared car.

The City will now require inclusion of car-sharing spaces in new high-rise residential development.  The Sydney Morning Herald grabbed that point as the lede:

ALL large new apartment blocks in inner-city Sydney must have parking spaces for car share vehicles, according to a City of Sydney proposal, the latest move by a council to discourage vehicle ownership.

Large residential blocks will have to include one car share space for every 50 regular spaces under a draft Development Control Plan endorsed by the council’s traffic committee last night.

The division of metropolitan Sydney into more than 40 city governments is mostly a barrier to good planning, but it does have a positive side for the inner city.  With its CBD-driven tax base and exclusively high-density, inner-city population, the City of Sydney has both the resources and the political consensus to drive aggressive change.  There’s plenty of controversy about the details; everyone loves cycle lanes, for example, as long as they don’t take “my” on-street parking space.  But the broad sustainability context of the City’s work, and the need to restrain cars, is not controversial.  Given the continued development of high-rise residential, I’d gamble on the city exceeding its target to have 10% of residents in car sharing, even if the costs of car ownership stay roughly the same.

Full disclosure:  I do occasional consulting work for the City of Sydney, but not in the area of car share policy.

Sprawl and Serenity
Comment of the Week: Serene and Effective Transit