Long ago I highlighted an early product by WalkScore.com which enabled you to select a location and time of day, and then showed you a map of all the places you can get to on transit within a specified time.  Reader Tom West points me to a new effort along similar lines, called Mapnificent, by Stefan Wehrmeyer.  He describes the product on his blog in both geeky and practical detail.

Here’s everywhere you can get to in 28 minutes from 9th & Market Streets in San Francisco.  I’m assuming this is based on midday timetables. 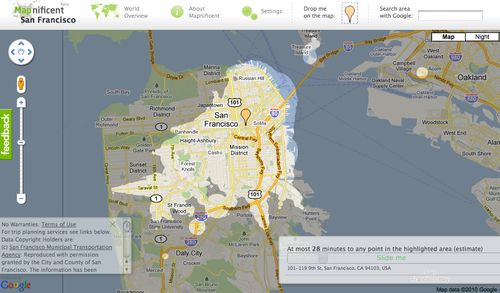 The white dot in the East is a walk radius from West Oakland BART station, the first station east of the bay.

The sharp point sticking out toward the ocean is made up of walk radii around the stops of the L-Taraval streetcar.  As you go further out you have less time remaining to walk, so the circles get smaller.

Other assumptions are more peculiar.  Waiting time at a connection point is assumed to be a third of the headway, rather than half, because such connections are sometimes timed.  In practice, timed connections are most important at very low frequencies, 30 min or more, where they make a huge difference in travel time.  But there’s no consistent way to represent this with averages.  The WalkScore tool avoids this problem by tracking a trip via actual timetables, so no averaging is required.

It would be nice to have more options to fiddle with, such as your walking speed.

Still, these are important tools, because they help people make smarter decisions about where to locate.  Eventually, every realtor and leasing agent will use something like this.  And every transit agency will want its services shown.

The Peril of Low Base Fares
Connection Penalties as “de facto Redlining”?

18 Responses to “Mapnificent”: Your Freedom to Roam

You are here: Home › “Mapnificent”: Your Freedom to Roam