Posted on November 14, 2010 in Architecture, Portland

You know you’re middle aged when a thing that was new to you as a teenager shows up in a museum, or as an artifact deserving “historic preservation.”  I will never forget coming around a corner in Berlin’s DDR museum and seeing a whole bunch of wide-eyed teenagers gazing at one display; it turned out that they were all looking at a manual typewriter.

I had the same reaction when I was in Portland in October, and stumbled on one of the original Portland Mall shelters.  These were built in 1978, and their woozy mushroominess made perfect sense in the 70s idiom.  (Compare, for example, rockstar hair from that decade.) 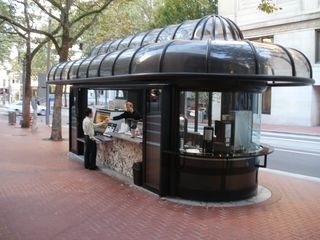 The shelters bit the dust in the Mall remodeling project of 2008-9, but this one shelter survives as a “historic” urban artifact, sensibly reused as a coffee stand.

New York’s Broadway: Why Do the Cab Drivers Hate It?
Transit’s Role in “Sprawl Repair”