New York City Transportation Commissioner Janette Sadik-Khan is here in Sydney, and spoke last night at the City of Sydney’s CityTalks series, hosted as always by Sydney Lord Mayor Clover Moore.  Sadik-Khan gave her standard presentation on her work in New York, with emphasis on the conversion of traffic and parking space to pedestrian and park spaces.  She also highlighted the new Bus Rapid Transit project, called Select Bus Service, clearly distinguishing between SBS projects that are still compromised, such as First/Second Avenue and Fordham Road, and those that really will be fully exclusive-lane and thus highly reliable, such as the 34th Street line now under development.

Sadik-Khan was as eloquent as usual, but she was asked one question that seemed to deserve a better answer.  The question was “Why don’t the cab drivers like the removal of traffic lanes on Broadway?”

Broadway, a diagonal street across the otherwise regular midtown Manhattan grid, is gradually being converted from a through-traffic street to a low-traffic local street with a generous pedestrian and outdoor seating area, like this: 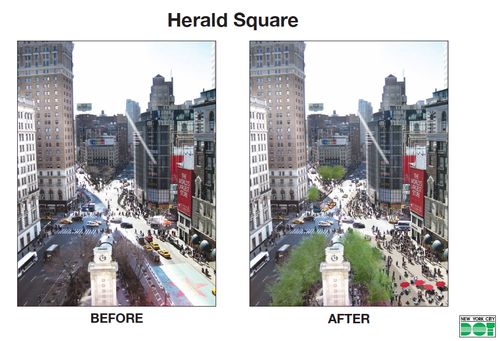 The remarkable thing about this project is that it not only created a lot of pedestrian space but also improved overall traffic flow on other streets of the Manhattan grid, or at least on the long north-south avenues.   Vehicular flows on these avenues actually improved, as measured by GPS transmitters located in all of the city’s taxis.

That outcome is credible because the diagonal intrusion of Broadway had always interrupted what were otherwise consistent flows of green-time along Manhattan’s parallel avenues.  At times when the rest of the grid flowed fairly well, intersections involving Broadway tended to be particular knots because Broadway required an extra signal phase.  De-emphasizing Broadway as a car traffic street has apparently had the effect of removing some of these knots.

So as Sadik-Khan reports it, the taxis themselves measured an improvement but the drivers of those same taxis still declared the change a failure.  Sydney is contemplating a street-repurposing project on George Street (coverting traffic lanes to pedstrian, bike, and light rail) that will be at least as impactful as the Broadway changes in New York, so Sydney listeners needed some useful advice on this point.  Taxi drivers, like hairdressers, get many opportunities to share their opinions with customers.  (This is especially true in Australia where solo customers usually sit in the front seat, so that chatting with the driver feels like a natural thing to do.)  Becuase taxi drivers are often intensely knowledgeable about the city and its traffic, it’s easy for the average citizen to assume that they’re experts about urban transport issues generally.

All Sadik-Khan offered on this was the usual “change is always difficult” line, or as she put it: “Everyone wants change so long as everything stays the same.”  Yes, taxi drivers may be thinking like NIMBYs, with feelings of entitlement about all the street space in the city, but many of them are also — as Sadik-Khan herself mentioned — very smart and practical.  Among such smart and practical people, why is there such disapproval of the changes to Broadway?   Does the taxi industry see no benefit in having more pedestrians on the streets of Manhattan?  After all, only pedestrians hail cabs …

22 Responses to New York’s Broadway: Why Do the Cab Drivers Hate It?

You are here: Home › New York’s Broadway: Why Do the Cab Drivers Hate It?