Washington DC has its downtown circulator, and now the Washington DC of Australia, Canberra, has one too. What’s more, my clients in Canberra created their circulator for almost zero in new operating costs, using one of my favorite planning tricks. Starting next week, four color-coded lines will provide frequent links among all the major tourist attractions, government buildings, universities, commercial districts, and interchange points in the dense core areas of the Australian capital. 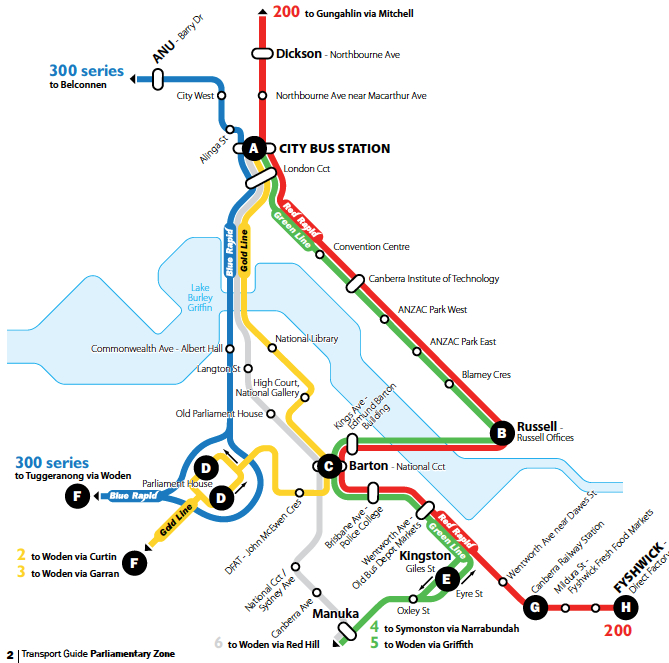 For the whole brochure on the circulator, click here: PDF

Where did all this new service come from? Most of it was already there, but was presented as a tangle of several infrequent lines.  These were just too hard to figure out for someone making quick trips around the core.  Short trips are very time-sensitive, and that includes the time it takes to figure them out.  So circulators have to be frequent and simple.

For several years, Canberra has been discussing options for creating a shuttle system to link these core destinations, but they could never find the money.  Instead, I suggested that we look at whether bus service that’s already there could be branded to form legible and frequent circulator lines.  It turned out to be possible, with only slight service additions and some careful revision of timetables.

The Gold Line and Green Line are each created out of two existing routes that are every 20-30 minutes when separate but that combine to provide high frequency when running together.  When they’re separate, they’re just Routes 2, 3, 4, and 5, each doing its own business. But when Route 2 and 3 are together, that common segment is branded as the Gold Line. Likewise, the segment where 4 and 5 are on top of each other will be called the Green Line.

Signage and new marketing will highlight that you can use these colored lines to circulate around the core, and you don’t have to care what the line numbers are. People don’t have to remember that to get from the City station to the National Library they need the 2 or the 3. Instead, they can just remember the Gold Line.

Obviously, a combined frequency of 15-20 minutes is not enough for a true circulator.  The goal is to get to 10 or better as demand grows.  Now that Canberra has the color-based brands, future planners can easily decide to design other lines to flow through the branded segments, thus contributing to the combined frequency.  In many cities, there are situations where six or more half-hourly lines are effectively right on top of each other for a long distance; those are ideal candidates for a color-based brand that combines them into a (possibly very frequent) shuttle.

At the same time, Canberra is re-branding the two existing Rapid bus corridors as the Blue Rapid and Red Rapid. The Red Rapid happens to be one frequent line with no variants, but the Blue Rapid is formed of many overlaid lines, all numbered in the 300s, that do different things on outer branches but all run along the same Rapid segment linking several major town centers.  Together, the Red and Blue Rapids will form the frequent rapid-transit backbone of Canberra’s all-bus network.  As it happens, they also link some useful dots within the core area, so they’re on the core map as well. 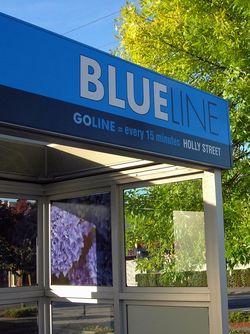 This branding technique is often useful in relatively small cities that have a few strong frequent corridors.  I first suggested it in Bellingham, Washington, a university town north of Seattle, and this shelter displays one of the results.  Again, the Blue Line consists of a big pile of three-digit route numbers, but now nobody has to remember those numbers to navigate this high-demand corridor that runs through the university and into downtown.

Often in small cities, these frequent segments are served by several different routes overlaid, but the pile of route numbers makes the service seem complex.  The color brands let people ignore that complexity and see the frequency clearly instead.  Since frequency is the foundation of freedom for transit riders, transit agencies that want to be instruments of freedom should make it as visible as possible!

20 Responses to Canberra: A New Circulator Network for the National Core

You are here: Home › Canberra: A New Circulator Network for the National Core