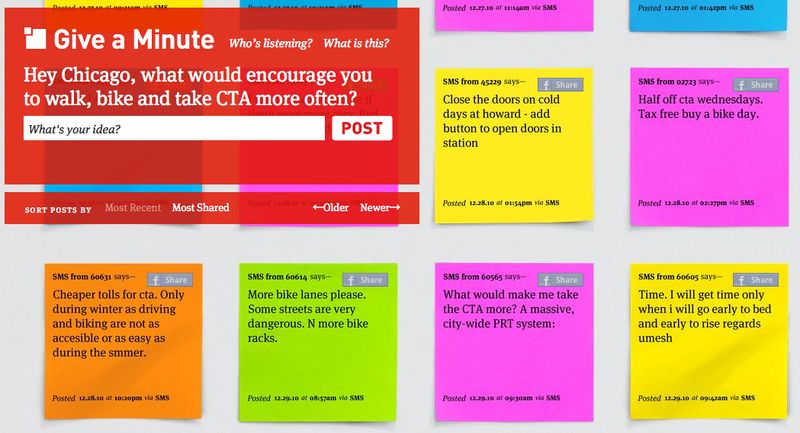 Alex Davies in Treehugger looks at a Chicago campaign seeking public input on what would make people use sustainable modes:

Over the last few weeks, Chicagoans have been asked a simple question: "What would encourage you to walk, bike and take CTA (Chicago Transit Authority) more often?" Ads posing the question in buses, subways and public spaces invite the city's residents to respond with their ideas, via text message. This mass call and response is part of Give a Minute, a campaign created by advocacy group CEOs for Cities and media design firm Local Projects, which looks to take public dialogue out of town meetings and into the streets. The idea is simple: by making participation as simple as sending a text message, Give a Minute will bring more people, and ideas, into the debate.

We've long known that this kind of outreach is needed to have a useful conversation about new transit projects.  The old solution — inviting people to attend public meetings — has always produced highly skewed responses, over-weighting the angriest feedback.  Anything that can broaden the conversation is useful.

But for reasons explored here, I generally advise against grand hypotheticals: "What would you do if …?" or "What would encourage you…?"  Nobody can answer those questions accurately, so the answers are a poor guide to what investments would really pay off.

What's really needed is to engage the public in thinking about real tradeoffs, such as the choices built into budgets.  What are your priorities, this or that?  Those hard choices are the real work of elective government.  If we ask people to think about those questions, we not only get more reliable answers, we also encourage citizens to ask smarter questions themselves.

do roads pay for themselves?
email of the week: thinking pedestrian thoughts

You are here: Home › chicago: asking the right question?