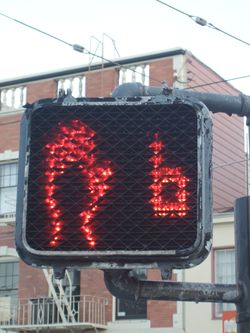 Is it useful to talk about "pedestrians" as a group the way we often talk about cyclists or transit riders?  All these category terms are problematic, as I discussed here.  Riordan Frost of Minnesota 2020 asks:

A recent article in a local paper and its connection to one of your previous blog posts has inspired me to write to you. The article is “Thinking Pedestrian Thoughts”, and it covers the recent adoption of a ‘pedestrian plan’ by Edina, which is an inner-ring suburb of the Twin Cities [of Minneapolis and St. Paul]. One of the points made in the article is that people don’t really advocate for themselves as pedestrians. This made me think of a post that you wrote back in October, which was entitled “should I call myself a ‘transit-rider’?” and discussed labels given to people using certain modes of transportation. In the post, you quote Michael Druker, who advocates for switching from ‘cyclist’ to ‘people cycling’ and from ‘pedestrian’ to ‘people walking’.

You agreed with him, but pointed out that these new terms were cumbersome, and you would probably still opt for the shorter terms in your writing. I write blogs and articles for MN2020, and I feel the same way. I understand the importance of what language we choose, and I try to be conscious of it in my writing, but I have a need for brevity and I have an editor. There is a more significant question apart from brevity, however: how do we avoid labels (which may carry negative connotations and/or stereotypes) while advocating for improvements of certain modes? …

Is it possible to cut down on lumping people into categories and still have effective advocacy for certain modes, like better crosswalks or more bike lanes? The cycling community is pretty well established in the blogosphere, which sometimes contributes to their ["cyclist"] label and its connotations, but pedestrians have no blogs or personalities specifically tailored to them – mostly because we are … all pedestrians at some point in the day, and there is nothing terribly distinctive about walking. I n a perfect world, we would just design our environments for all modes of transportation that people use, with people (not cyclists vs. motorists vs. pedestrians) in mind.   This doesn’t seem terribly viable, however.  What are your thoughts on this?

I think that the potential for organized activism and fellow-feeling is easier among a group of people who all wield the same tool, because tools are such powerful symbols.  Think about the role of the hammer and sickle — archetypal tools of manufacturing and agriculture, respectively — in the imagery of Soviet communism, for example.

The possession of the tool, and the knowledge of how to use it, becomes a feature by which a group defines itself and sets itself in opposition to other interests.

If you don't think this still happens, look at all the clubs and forums for people who own and cherish a particular tool — a Linux-powered computer, say, or a certain musical instrument.  If you read an online forum about such possessions, you'll see the practical work of exchanging troubleshooting tips also builds a community in which people love hearing each other's stories about life with the cherished tool.

So this is another thing that's going on behind the obsessive attachment to transit technologies.  People who love aerial gondolas or whatever can now network worldwide with every city that runs one, compare notes about each other's problems and achievements, and thus form a global community based on love of that particular tool.  Psychologically, it's just like a club of guys who all own a particular kind of car, or computer, or electric guitar, or whatever.

Pedestrians don't have that.  So I doubt we'll ever see a pedestrians-rights movement that has anything like the shape and force of the cycling movement.  Nor do we need to, really, because the best urban planning thought today is all about the primacy of the pedestrian.

Ultimately, the strongest case for "pedestrian rights" is that we are all pedestrians.  Even the guy who loves his Porsche has to walk across parking lots, and can thus see the value of having protected paths between rows of cars instead of having to walk in the lot's roadways where a car can back into you.  Even he has a sense of what makes a shopping center or major downtown pleasant or unpleasant to walk in.  Maybe he's even broken down on the freeway and thus experienced what those places are like when you're out of your car.  So it's not hard to make anyone understand a pedestrian issue on analogy to the walking that everyone has to do.  That's how you win these arguments, I think.

17 Responses to email of the week: thinking pedestrian thoughts

You are here: Home › email of the week: thinking pedestrian thoughts