Matt Lerner of WalkScore.com and I recently exchanged emails about WalkScore’s “Transit Score” product, which provides a two-digit score supposedly capturing the usefulness of transit at any address in the USA.  It’s designed on analogy to the successful (if still controversial) Walk Score, a similar tool for summarizing how friendly a place is to walking.  For example, 300 Turk Street, San Francisco is scored 100 (perfect) on both Walk Score and Transit Score. Toward another extreme, here’s 7000 Lake Mead Blvd in the far east of Las Vegas.  Walkscore is 52, Transit Score is 33. 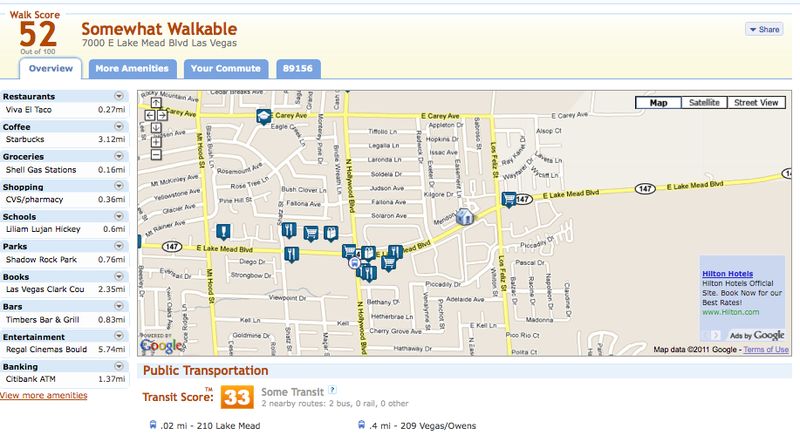 Tools like these have huge potential relevance to the real estate industry, and more broadly to anyone who makes locational decisions about anything.  To the extent that we encourage people who value transit to locate where good transit is viable, everyone wins.

Earlier, Matt’s team had created a “transit travel time tool” which can be used to show you the actual area you can get to in a specified amount of time.  I used this tool as the core of my definition of mobility, in one of this blog’s earliest posts. 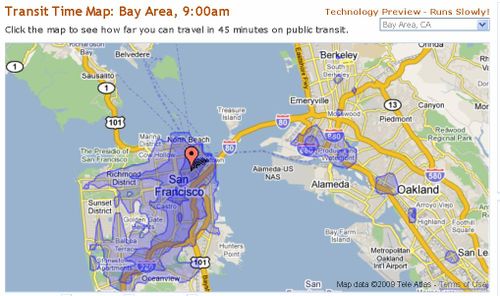 So which is more useful, the simple two-digit Transit Score, or an actual map of where you can get to in a given time?

Here’s what I wrote to Matt:

The first draft of the book I’m writing … praises this WalkScore tool in some detail, as a way for people to understand the degree of freedom that transit will offer them.  I think it may be a crucial tool for helping people see beyond modal fetishes to understand how transit actually works and how to determine if transit can actually get you where you’re going.

…  Transit Score is useless to me because it encodes an intrinsic bias toward rail modes, as though rail is intrinsically faster, which is utterly misleading in a world of 6.5 mph streetcars and 60 mph busways.  [I’m referring to the Transit Score methodology’s use of a “mode weight” defined as “(heavy/light rail is weighted 2X, ferry/cable car/other are 1.5X, and bus is 1X)”.  Note that unlike the travel time tool, Transit Score lacks a way to capture how far you can get how fast, so it uses mode as a proxy for speed, fatally in my view.]

In short, whereas the earlier tool presented raw information in a compelling way that the user could use for her own purposes, Transit Score contains value judgments (“we know you’d rather ride a slow streetcar than an express bus”) which the user may not share, and thus may be an obstacle to her ability to make transit meet her needs.

So I guess I will praise mapnificent.net instead.

This issue sits at the very foundation of my current book, so as an admirer of your work, I’d like a better understanding of why you abandoned the original accessbility tool. Was it a matter of the processing required to do what’s basically a massive search of trip planners?  I can see that Transit Score is a much faster calculation, but wonder if that was the key issue.

Good to hear from you.

You’re right that we are promoting Transit Score over Transit Time Maps — but we haven’t abandoned the transit time maps.  We are working on new ways to use them and they are still available here: http://www.walkscore.com/transit-map.php).

Here’s why we’ve been promoting Transit Score more heavily.  Our mission is to promote walkable/transit friendly neighborhoods and we think the best way to do this is to have Walk Score / Transit Score on real estate listings.

As we developed Transit Score we looked at a few methods of calculating a Transit Score.  The two finalists were our current method (detailed here) and a method where we summed the Walk Score under the area of the transit shed in our Transit Time Maps.  In practice, the scores were very similar between the two methods so we chose the current method which is much easier to scale (we show millions of scores per day).

We want to boil down transit access into a score so that it can appear on real estate listings and people can compare locations.  ZipRealty.com has added our Transit Score to millions of listings and we have some more partners on the way.

We did not see a lot of consumer/partner interest in the transit time maps — which is unfortunate because of course I love them.  One scenario I’m hoping to promote with our Transit Time Maps (we just need a partner) is to allow people on real estate sites to search by transit time.  E.G. find me an apartment within 30 minutes of work on transit.  I’d also like to integrate the transit sheds into the standard Walk Score experience.

I like the simplification Mapnificent made which was to not include walking time in their transit sheds — this makes it much easier to compute.

So to sum up, I like your suggestion of avoiding any mode weight value judgments — it just turns out that in practice our current method was very similar and easier to scale. Anyway, would love to hear your thoughts on this.

Also, we’re launching a beta of “Street Smart” Walk Score later this month and we’d love your feedback on that too.

To which I replied:

Thanks!  … Suppose, hypothetically, that you had the processing power and datasets to run a purely mobility-based Transit Score.  Let’s call it a Transit Mobility Score.  The algorithm would be something like:  Identify the area reachable in 30 minutes on transit from the selected point (I choose this because it seems to have a long history as an acceptable commute time).  Then, grab the MPO’s database of population and jobs by small zone and calculate the percentage of the region’s jobs and population that are in that 30 minute band.

That also gives you a 2-digit number, but now it’s a fact rather than a score.  You’re saying: “If you locate here, you’ll have convenient transit access to __% of the region’s activity.”  And that strikes me as something that a realtor could value, understand and explain.  How far are you (or someone) from being able to do that kind of algorithm?  Obviously you’d need to have the MPO on your side, so start with somewhere like Portland where they generally are.

Frankly, you’d probably want to do two such scores, one based on your mobility at 8:00 AM and another for your all-day mobility — say, at 1:00 PM.  But I think a realtor could make sense of those too.  Everyone understands that transit in the peak is different from midday, and that both matter.  Suburban areas, especially those under the influence of commuter rail and commuter express buses would show quite a difference between the two.

I think this could be huge.  Because the output is a fact, not a judgment. …

All the best, Jarrett

Matt replies that this “sounds like an awesome planning tool and one we could potentially pursue if we had a grant or something to fund it.”

I still think this could be huge.  What if everyone making a locational decision could go to something like the WalkScore travel time tool or Mapnificent and see a map of where they’ll be able to get to in 30 mintues on transit?  It would finally make our mobility visible.

And if we could measure our mobility so accurately, for so many hypothetical cases, we just might value actual mobility more, and be less distracted by unreliable symbols of mobility — like, say, whether there are rails in the street.  Technophiles shouldn’t be too alarmed; many people will still have modal preferences.  But meanwhile, those of us who just want mobility would be able to measure it, fast, for anywhere that we might be locating something, including our homes.

12 Responses to Beyond “Transit Scores”: an Exchange with Matt Lerner

You are here: Home › Beyond “Transit Scores”: an Exchange with Matt Lerner