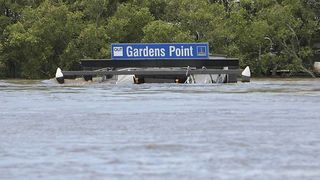 The great flood of 2011 has damaged many of Brisbane's riverside neighborhoods and destroyed the wharves of the CityCat river-ferry system.  You can find plenty of images of the damage on the the websites of the Brisbane Times (Fairfax Media) and the Australian (Murdoch).

Here is footage (starting at 0:20) of the destruction of the floating section of the Riverwalk, which connected downtown to the dense New Farm district and carried thousands of pedestrians and cyclists per day.  The huge piece of bridge was later intercepted by a heroic tugboat driver, who prevented it from crashing into the pylons of the Gateway Bridge.  Many also have images of the Drift Cafe, a floating restaurant just a few meters from our office, breaking away and crashing into a bridge.  And this jumped out from the Australian's coverage:

All buses to the city centre were cut off, trains continued to run but only sporadically, …  Military demolition experts were dispatched to the Moggill ferry – still hanging on by one of the two ropes it uses to help ferry vehicles across the river – to determine whether the safest option was simply to sink it.

Yes, thanks everyone all over the world for their support.

Our beautiful CityCat [river ferry] network is ruined. It will have to be rebuilt. Some of the city's favourite places like South Bank are covered with water, and you need a boat to go down Coronation Drive.

The transit authorities have done a stellar job moving trains out of the yard and parking them nose-to-tail in giant "snakes" to get them out of … stabling which could be flooded. Skeleton bus and trains running. …

the river was full of logs, pontoons and luxury boats hurtling down like missiles. Not sure where any of the citycats are.

My understanding was that the CityCat ferries are safe, but that most of their wharves have been destroyed.  UPDATE: Commenter Daryl Rosin advises that the ferries were moved out onto Moreton Bay, and berthed at Manly, where the river flooding won't affect them.

brisbane: the 100-year flood
brisbane: free fares for a week, ferries out of action

6 Responses to brisbane: the flood at its peak

You are here: Home › brisbane: the flood at its peak