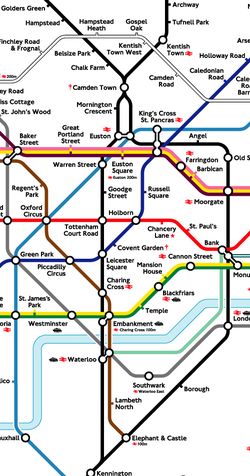 Commenter David M on what rivers teach about transit:

It's interesting to note that in London the newest Underground lines have no branches (Victoria, Jubilee). In fact, when Jubilee was originally opened it took over one of the Bakerloo Lines branches, reducing the Bakerloo to a branchless line also.

For real complications, look at Camden Town [top center] on the Northern Line [black on this classic map] in London, England. Just south of this station is a complex deep underground junction that lets trains from any two of the branches south of Camden to simultaneously run on any two of the branches to the north. It is a marvel of engineering, but it is also an operational nightmare with trains run from any branch to any branch – one train runs late and it can cause problems on all of the branches.

The other night a Sydney rail expert was telling me that when the North West line is built, creating a four-way junction at Epping similar to the one at Camden Town, they will spend a number extra millions on the tunnelling to create the ability to route trains from any segment to any other.  A similar decision has already been made about a similar junction at Glenfield in Sydney's southwest.  I wonder how much could be saved if we let lines cross without connecting track, and required connections, where that pattern makes sense as part of a larger grid.  It's not the right answer everywhere, certainly, but it sounds like London transit experts aren't very appreciative of all the flexibility that their great-grandparents gave them with the design of the Northern Line.