Cartographer (and artist) Daniel Huffman is drawing river systems as subway maps.  He insists it’s just for fun, but these maps push an important button for me. 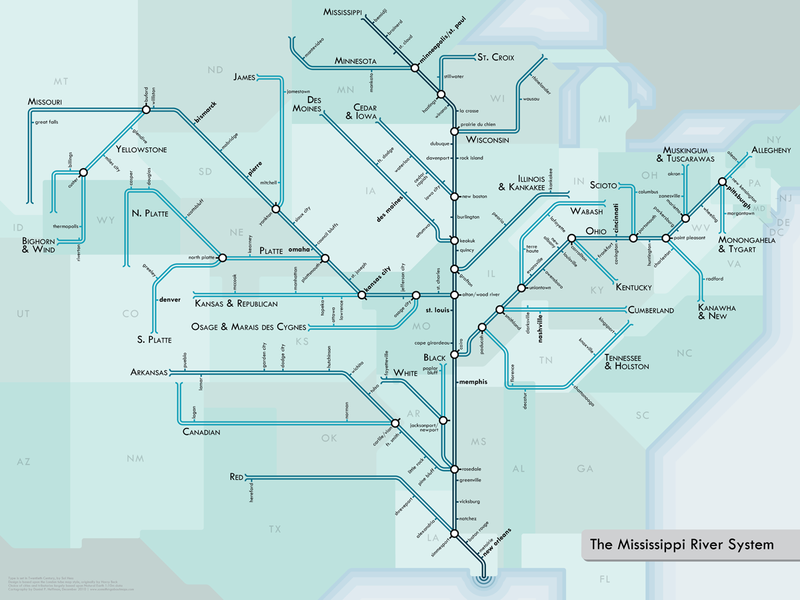 Leigh Holcombe’s email pointing to Huffman’s work is fascinating timing, because I was just about to write a section of the book on how branching dissipates frequency.

Really, these fanciful maps are a bit reminiscent of some real transit maps, aren’t they?

Metlink’s map of the Melbourne train network has important things in common with a river system map.  First, both networks are radial, which means that all lines converge to flow to a single point (New Orleans for the Mississippi River, the City Loop for Melbourne’s trains).  And necessarily, both maps are full of branching:

But branching always divides frequency.  The Melbourne map gives a superficial impression that Lilydale, Boronia and Ringwood all have the same kind of transit service.  They certainly all have train stations, but the branching means that Ringwood has to have more frequent service than either branch, and that may be the difference between a service that can be used spontaneously and one that requires you to build your life around a timetable.

… because this always means one of three things.  Either (a) points beyond the branching point have less frequent service or (b) one of the branches operates as a shuttle, requiring a connection, or in a few rare cases (c) the train itself comes apart, with some cars proceeding along one branch and some along the other.  Geometrically, it has to mean one of those things.  And before you decide whether the service is useful to you, or whether you support a proposed transit project whose map looks like this, you should ask which of those it is.

I’ve always been partial to mapping styles where a branch is rendered as a wide line splitting into two narrow lines, such that the width of the two narrow lines adds up to the width of the main line.  In my presentation “A Field Guide to Transit Quarrels,” I used that approach to clarify one of the possible branching patterns of BART’s San Francisco Airport line (though this is not the pattern that runs today.)

has anyone ridden a yike-bike?
london’s northern headache

36 Responses to what rivers teach about transit

You are here: Home › what rivers teach about transit