Regarding Place has a good article on the recent reform of bus services in Seoul, South Korea. 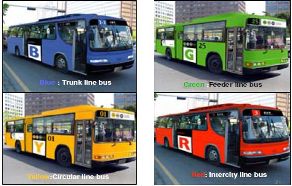 Seoul has done something that I often hear people ask for, a simple citywide color scheme that helps make the structure of the bus system obvious.  The four colors of bus correspond to four types of service:

I have mixed feelings about this sorting.  Usually I prefer to make distinctions about frequency and service span, but if overall frequencies are high I can certainly see the value in this system.  In a city with a clear distinction between radial and orbital directions, which Seoul seems to have, the distinctions can probably help people orient about which direction is which at various points, and to discern the general directions that each bus might go.

The same thinking extends to numbering system.  Traditionally, most big urban areas have had a sub-area based numbering, where in fact it may make more sense to number lines in ways that heighten the distinction between different service types.

Most big cities, of course, simply don't have the centralized control to do this.  Los Angeles Metro has made an effort with its Rapid vs Local branding, but most color schemes are tied to the brands of municipal operators whose service is entangled with Metro's.  Cities with a single consolidated transit agency could do it.  In Australia, any state government could do it, though it would need to gain ownership of fleets that are currently owned by private operating companies.

Obviously, you're sacrificing "operational flexiblity" in terms of being able to deploy any bus on any line.  Now and then in Los Angeles you'll see a Local bus on a Rapid line and vice versa.  I think Seoul deals with this by running all buses of one color out of one operating base, often with a separate contract operator, so the systems are functionally separate.

If you've been to Seoul and seen this system in action, please share your impressions.

25 Responses to seoul: buses that tell you where they go?

You are here: Home › seoul: buses that tell you where they go?