The esteemed Brookings Institution US magazine The Atlantic says that America's best city for transit is … <drumroll> … Honolulu!

Sooner or later, everyone ends up on a "10 best" list.  This time around (apart from Honolulu) Brookings seems to be reaching out to southwestern cities that feature vast grids of fast car-centered arterials spreading out across any available flat land.  Are those the best cities for transit?  Well, maybe it's just their turn.

As regular readers of this blog understand, "best city for transit" is a meaningless term.  There are many ways to define "best," and we don't always agree with ourselves on which one matters, let alone agree with anyone else.

But the Brookings definition, as described in the Atlantic article, is especially perverse, even by "10 best" standards:

Brookings graded each city according to two criteria — coverage (the share of Americans within 3/4 miles from a transit stop) and job access (the share of city jobs accessible within 90 minutes of transit) — to determine the ten best performing cities for public transportation.

I have no idea what "within 90 minutes of transit" means, and the original report doesn't appear to be on the Brookings website.  [UPDATE:  Now I do.  Look for a post on this soon.]

But residential coverage, as a primary indicator of transit quality, is a very loaded way of thinking about "best," especially if you care about transit sustainability outcomes that depend on ridership.  Many people are within walking distance of a bus stop but not within walking distance of service that's remotely attractive in terms of frequency, speed and reliability.  (Even more are within "air distance," which is what Brookings seems to refer to.)

Due to this definition, the Brookings Atlantic list comes to focus on rather low-density, car-dependent cities that happen to have good transit coverage.  The cities listed have transit systems that are complete in terms of getting close to almost every home, but in low-density cities this is usually achieved by sacrificing frequency, speed, and even directness.  For example, if you really want to maximise your residential coverage without spending money, and thus satisfy the Brookings criterion, just design routes like this: 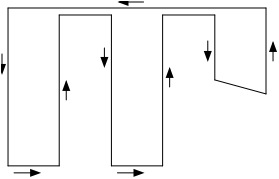 This is what "residential coverage" standards encourage transit planners to do!  So Brookings needs to explain how an abundance of transit routes that look like this could indicate a "best city for transit."

Then there's a pedestrian environment.  Many of these cities are hard to walk in, and transit especially often delivers you to a busy arterial where you'll have difficulty walking to nearby destinations.

Finally, of course, "residential coverage" is about how many people have access to the system, which has nothing to do with who finds it useful.  In fact, a transit system that's trying to maximize its relevance is always trying to push residential coverage standards down so that they can focus more service on dense areas where residents are more likely to want to build their lives around transit and other sustainable modes.

UPDATE:  Having now perused the Brookings report, I stand by these last three paragraphs, but will expand on them soon.  I'm relieved to know that Brookings's framing of the issue is smarter than the Atlantic made it sound.

Still, a report like this from a distinguished institution raises great opportunities to question some of the more common assumptions about how transit should be compared across cities.  So I take issue with their reliance on city limits and Metropolitan Statistical Areas, among other things, not to criticize Brookings but simply to encourage more nuanced and coherent explanations of this kind of statistical work.  More posts on these critiques in the future, starting here.

37 Responses to updated: another weird way to measure “best cities for transit”

You are here: Home › updated: another weird way to measure “best cities for transit”