If you visit Chicago, and a local friend tells you to meet her at the Western "L" station, then either (a) she's not really your friend or (b) she isn't as local as she claims.  There are five stations called Western in the Chicago rapid transit network:

These duplicate names arise from naming stations solely after a cross street, without reference to the street or path the rail line is following.

But the secret language of Chicago transit desires is even more subtle.  If your friend tells you to meet her at Western Brown Line station, she's probably a local, but if she directs you to Western Blue Line station, you're still in trouble.  As you can see above, there are two.  This one is the more scenic, but note the absence of any signage that might distinguish it from the other one: 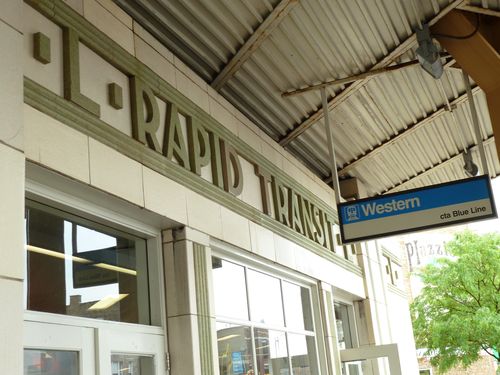 Although there are a small handful of duplicate station names in other New World gridded cities (one pair in Buenos Aires, four pairs in Cleveland, two pairs in Philadelphia), New York City is the only system I know of where you'll see the same naming style used in force.

Few agencies, however, would give the same name to two stations on the same line, as Chicago does.  Toronto, one of the few big cities that's as relentlessly gridded as Chicago, is obviously at pains to avoid it.  Their U-shaped north-south subway line crosses many main streets twice, and in each case they append "West" to the name of the more westerly of the two.

Los Angeles, like Chicago, has a long Western Avenue that has two stations where different branches of a rail line cross it.  But they didn't call both stations "Western."  They used the full co-ordinates:  "Wilshire/Western" as opposed to "Hollywood/Western."

How do Chicagoans cope with all these duplicate names, even on the same line? No big deal, says Jeff Busby, a Chicago-sourced transit planner now at Vancouver's TransLink:

In partial answer to your question, I would observe that the grid is an overriding organizing element for Chicagoans.  Everyone knows that State and Madison is 0N/S & 0E/W and coordinates are powerful for knowing where you are and how to get somewhere else.  Station platform signs give the N/S & E/W coordinates.  Station names that reinforce their location in the grid are valuable.  I know that Ashland is 1600W and Western is 2400W so that new restaurant I’ve never been to at 2200W is probably closer to the Western station.

To minimize clutter on the system map, stations are generally named for the arterial that crosses perpendicular to the rail line, but in the local language (and the on-board announcements) they are known by both cross streets. For example, the Loop stations are known as State/Lake, Clark/Lake, Randolph/Wabash, Library-State/Van Buren, etc even though they are abbreviated on maps as State, Clark, Randolph and Library.

In this sense, having five "Western" stations is not as confusing at it might seem.  First, it immediately orients you to where they are — on Western Avenue, accessible by the 49-Western bus that travels from Berwyn (5300N) south to 79th (7900S), and a local suggesting that you meet at the “Western L station” would probably use a different term (from North to South):

Indeed, the near universal repetition of grid number coordinates is a striking thing in Chicago.  You'll find them on every streetsign and every platform station name sign. 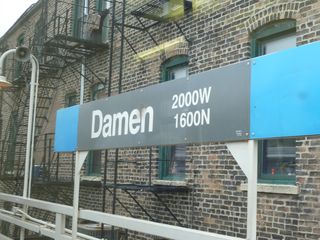 So it really is possible to ignore all the street names and navigate a city of co-ordinates, much as you would do in Utah cities where you'll encounter street names like "7200 South Street".

Unique features of a transit system are often keys to the spirit of the city.  Grids were fundamental to the rapid settlement of the midwest and west, so for Chicago — a city built on commerce to and from those regions — the strong grid is an expression of the city's economic might.  All cities have street networks, but few cities attach such strong symbolic value to the nature of their street network, or celebrate it so explicitly.

And its certainly true that if you ignore the street names and embrace Chicago's numerical grid, there's never any doubt where you are, but of course that implies a sense of "where" that is itself grid-defined.  I'm sure Parisians take pride in the complete gridlessness of their city, and would say that "Place de la Bastille" is a much more satisfying answer to the question "where?" than any grid coordinates would be.  But then, Paris wasn't built to conquer a frontier.

26 Responses to chicago: living the grid

You are here: Home › chicago: living the grid