Can transit projects be judged based on the "welfare" of various user groups? 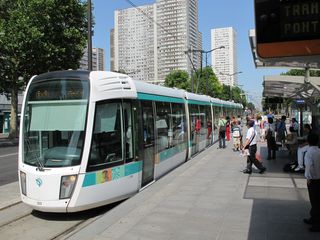 From a new paper in World Transit Research by Rémy Prud'homme.

In Paris, an old bus line on the Maréchaux Boulevards has been replaced by a modern tramway [the T3, opened in December 2006]. Simultaneously, the road-space has been narrowed by about a third. A survey of 1000 users of the tramway shows that the tramway hardly generated any shift from private cars towards public transit mode. However, it did generate important intra-mode [shifts]: from bus and subway towards tramway, and from Maréchaux boulevards towards the Périphérique (the Paris ring road) for cars.

… The welfare gains made by public transport users are more than compensated by the time losses of the motorists, and in particular, by the additional cost of road congestion on the Périphérique. The same conclusion applies with regard to CO2 emissions: the reductions caused by the replacement of buses and the elimination of a few cars trips are less important than the increased pollution caused by the lengthening of the automobile trips and increased congestion on the ring road. Even if one ignores the initial investment of 350 M€, the social impact of the project, as measured by its net present value is negative. This is especially true for suburbanites. The inhabitants (and electors) of Paris pocket the main part of the benefits while supporting a fraction of the costs.

So here is our plate of facts:

All that may be true.  Does this mean the rail line was a mistake?  Discuss.

network design course: the next step
transit and a shrinking u.s. government

You are here: Home › paris: did rail worsen freeway congestion?